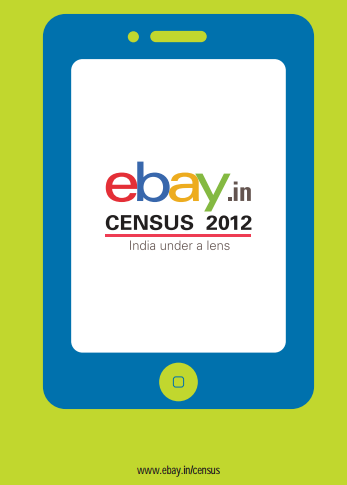 The eBay census guide is an annual e-commerce report that captures what Indians are shopping for online. The findings were based on an analysis of all online buying and selling transactions by Indians on eBay between July 2011 and December 2012.

It is interesting to note that Jaipur topped Bangalore this year and move in to the 3rd spot.

The top five states with the most transactions were Maharashtra, Delhi, Rajasthan, Tamil Nadu and Karnataka.

Andhra Pradesh tops the list of states having the maximum number of ecommerce hubs.

The top brands listed in this report are Samsung, Apple, Sony, Nokia and Sandisk. According to the study, eBay India is selling mobile accessories and health/beauty products every one minute; collectible coins and notes every two minutes and a stamp in every four minutes.

The census also revealed that Delhi had a sweet tooth (buyers from the capital city bought the most chocolate) while Jaipur users were buying maximum number of toy cars on eBay India. Bangalore, largely known as a tech city, gunned for yoga videos; Kolkata bought the most Tibetan collectibles and Ahmedabad women fell for lingerie. Interestingly, Uttar Pradesh was all for buying horse saddles (the most in 2012) while West Bengal bought maximum number of fishing hooks on eBay.