Facebook reported its Q4 results today showing a year-on-year revenue growth of 40% to %1.59 billion. Mobile revenues grew to make up 23 percent of the company’s total and mobile monthly active users rose to 680 million, or up 57 percent year-over-year.

Facebook also beat analysts’ estimates on EPS and net income with about $65 million in net income to an average estimate of $45.8 million, and EPS excluding certain changes of 17 cents, compared to the forecast of 15 cents a share from the same Bloomberg survey. In the same time a year ago, Facebook earned $302 million in net income on $1.131 billion in revenue.

As for the revenue breakdown, Facebook has two primary revenue sources: advertising and payments. Ad revenue was $1.33 billion, up 41 percent from the year before. Payments revenue came in at $256 million, but was essentially flat year-over-year if you factor in some accounting changes that required Facebook to count four months of revenue instead of the normal three for the quarter.

MakeMyReturns - Now You Don't Have To Worry About Your Taxes 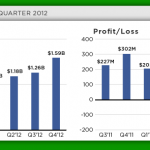