For HTC, Beats Partnership Was Missing A Beat

Beats Electronics, which sold half the company to Taiwanese smartphone maker HTC Corp. for $300 million in August 2011, says it is buying back 25 percent of itself for roughly $150 million and thus taking majority control of the company. Beats is a headphone and accessory company started by hip-hop impresario Jimmy Iovine and rap legend Dr. Dre. HTC is expected to lose about $5 million on this investment. In a press release HTC noted:

Under the terms of the agreement, the founding members of Beats will buy back 25% of its total shares for a total of approximately 75% ownership, with HTC remaining the largest outside shareholder with approximately 25%. Over the last year, HTC and Beats have made great progress in sound innovation, product integration and brand awareness with successes like the HTC One. HTC and Beats will continue to work closely, including a joint global marketing campaign later this year.

Earlier this month when Samsung and HTC announced their sales, it was clear that two companies were headed in opposite directions. The economic troubles in Europe haven’t helped matters either for HTC. Selling back half its stake in Beats is actually a good thing, as it allows the company to focus sharply on its next generation of handsets and tablets.

HTC stock since it announced its deal with Beats Electronics. 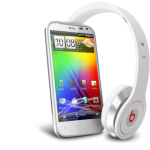 For HTC, Beats Partnership Was Missing A Beat