Google Gets Into the Cable TV Business, for Real

Google just announced as part of its Google Fiber broadband internet service that it will be getting into the real TV business.

The disclosure came at a presentation in Kansas City, where it is unveiling a high-speed Internet offering. The presentation is still unfolding so I’ll be adding more information as it comes. The big questions is which networks will be participating with Google.

The TV experience will not only be available on regular TVs in HD quality, but also on iPads and Android tablets, via a Google Fiber TV app. It also includes a DVR-service that includes two terabytes of storage.

The Internet service is going to run at 1 gigabit a second, both for downloading and uploading which is about 100 times faster than the standard cable modem that runs at about 15 megabits. The service comes bundled with a a terabyte of network storage on Google Drive.

Oh, and? Everyone who gets the service also gets a Nexus 7 tablet as a remote control.

The channel is list is extensive and includes a lot of channels I’ve never heard of — you can click to it here — but also appears to be missing some biggies. There’s Showtime and Encore, but no Disney, no HBO. Also nothing from Time Warner, which includes HBO, TNT and TBS. Also nothing from News Corp. which includes Fox News, fx and the Fox regional sports networks. Also, since MTV and Nickelodeon are on the list, it’s clear that Google has done a deal with Viacom, even though Viacom is still suing Google over YouTube. Okay then!
Read More

Google Introduces Handwrite, Letting You ‘Write’ Your Mobile Search Query With Your Finger 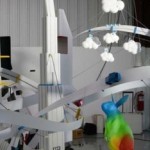 Google Gets Into the Cable TV Business, for Real