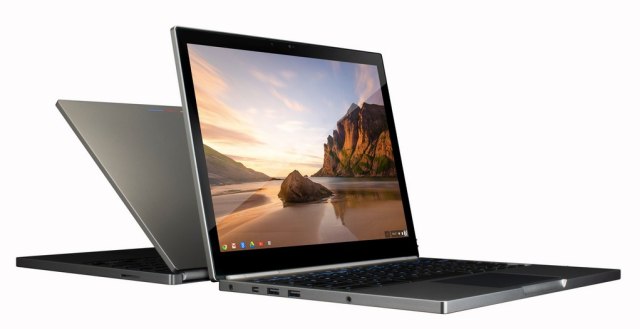 Finally, Google has announced the latest device in its Chromebook lineup – the Chromebook Pixel. Unlike the previous versions, this one is more powerful, high-end device aimed at power users.

The Chromebook Pixel has pretty good hardware – a 12.85 inch high-density 2560×1700 screen (that’s 4.3 million pixels) with a 3:2 aspect ratio, an Intel Core i5 processor and a whopping 1 terabyte of free storage on Google Drive for three years. Google will also soon launch a version with a built-in LTE radio and has partnered with Verizon to offer 100 MB/month for two years of mobile broadband and with GoGo to offer 12 free in-flight Wi-Fi sessions.

The best part of the Chromebook Pixel is definitely the screen. At 239 pixels per inch, it is now the laptop with the highest pixel density above the 220 pixel per inch of the Macbook Pro with Retina display. “I think the hardware shines,” Google VP Sundar Pichai said at a press event in San Francisco today. Google, Pichai stressed, wanted to build a device for power users who live in the cloud. “There’s a set of users who are really committed to living completely in the cloud,” he said, and Google wanted to build the perfect laptop for them.

Here are the full hardware specs: