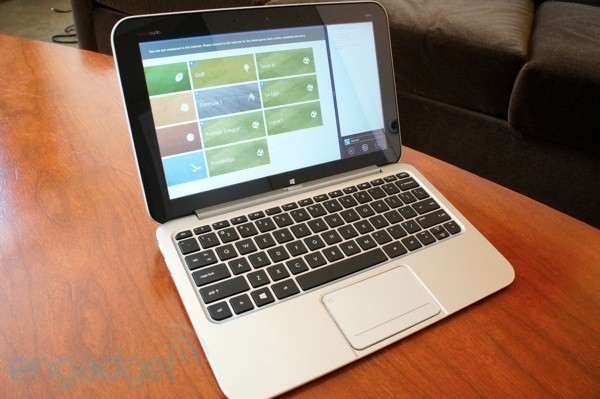 You didn’t think the world’s top PC maker was going to sit out the laptop / tablet hybrid trend, now did you? HP, one of the last OEMs to share its Windows 8 plans, just announced the Envy x2, an 11-inch tablet that comes with a keyboard dock. And while that form factor may already seem tired, HP is dressing it up with some higher-end features, including an aluminum build, NFC, pen support, Beats Audio and a 400-nit, IPS display. (The resolution is 1,366 x 768, as is the case for many of these 11-inch Windows 8 hybrids.) The tablet itself measures about 8.5mm thick and weighs 1.5 pounds, while the dock weighs 1.6. Unlike competing products, the device combines magnets and a mechanical latch to keep the tablet from falling out of its dock (watch us manhandle the x2 in the video below to see what we’re talking about). All told, we were impressed by how surprisingly light the tablet and dock feel — given the metal armor encasing it all, it’s easy to assume otherwise.

Under the hood, the x2 runs an Atom-based Clover Trail processor. Though HP isn’t ready to talk battery life, we’ve noticed that every other OEM releasing a Clover Trail device is promising between nine and 10 hours of runtime, so we expect the x2 to deliver comparable performance. What’s more, the dock has a built-in battery of its own, so you’ll definitely have some reserve power there. Poke around on the dock and you’ll find two USB ports, HDMI output and a full-size SD slot. The tablet itself is home to an 8-megapixel rear camera and microSD slot, in case the 64GB of built-in storage isn’t capacious enough.

Right now, it’s unknown how much the x2 will cost, or when, exactly, it will go on sale, except that it’s expected to arrive in time for the holiday shopping season. For now, feel free to poke around our hands-on photo gallery, and avail yourselves of our walk-through, embedded just past the break.