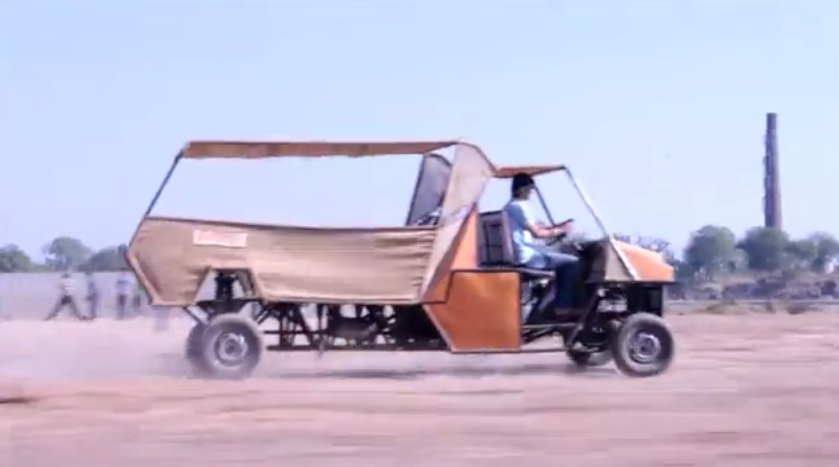 IIM Ahmedabad’s Centre for Innovation Incubation and Entrepreneurship (CIIE) fosters innovation driven entrepreneurship in India through incubation, investment and training. Since 2009, CIIE has made 75 investments, reached out to over 30,000 startups and budding entrepreneurs and has mentored 2000+ startups through the MentorEdge network.

In the 2012 Power of Ideas, held by CIIE in partnership with The Economic Times and Department of Science and Technology, Ahmedabad-based Evomo Research & Advancement Pvt. Ltd., a rural transportation enterprise was a winner. The bi-annual national wide competition selected India’s startups to receive personalized mentoring, evaluation by experts and a 10 day intensive workshop hosted at IIM Ahmedabad to pitch for a monetary prize.

In 2010, Abhinav Das was touring Uttar Pradesh where he saw unsafe locally-manufactured vehicles transporting people and goods. Better known as Jugaads and Chakkdas, they are seen in cities as close to Delhi like Ghaziabad to the interiors like Gorakhpur.

Though illegal and a dangerous transportation contraption, it is the lifeline of the rural people. Through their products, Evomo aims to empower rural communities across developing regions by providing affordable transport solutions. Evomo designs and manufactures low-cost Rural Utility Vehicles (RUVs).

There are more road deaths in India than anywhere else in the world – a man-made epidemic according to a government committee. In 2006 – more than 100,000 people died, and an estimated 2,000,000 were seriously injured.

The economic and social costs of these shocking figures are enormous – India loses 3% of its GDP to road crashes every year. Many of the deaths happen in rural areas, and one study found that 70% of families who lose their main wage earner in a traffic accident subsequently fall below the poverty line. And thus leaving the entire family in the hands of fate. In October 2010, the Rajasthan High Court had even ordered the banning of such contraptions.

The product is in alpha stage of prototyping and Evomo is actively looking for more investments to move to beta stage prototyping, testing, certification and launch later this year.

Good transportation is an enabler for social welfare as it brings communities’ faster access to all other facilities. More startups need to take up such challenges and create solutions to improve infrastructure. But this is a very small effort in the vast ocean which needs to be fulfilled – primary healthcare, education, food, housing and infrastructure are very crucial for rural India to drive growth.

The Government should encourage more institutions like the CIIE in every Engineering and Management college in India, so that this incubation centre culture can give rise to many more start-ups and power India to a brighter future. How long can we simply rely on the Government and the corporate world to fuel our growth?