Precision Match has released its “Mobile Handset Market Insights” report recently and as expected Micromax is rising the charts.

Here are some of the top insights:

The insights for the report are based on audience data of 5.3 million unique users across India over the 3 months (Dec 2012 to February 2013). This definitely gives a very good idea of the market trends in India. 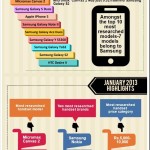