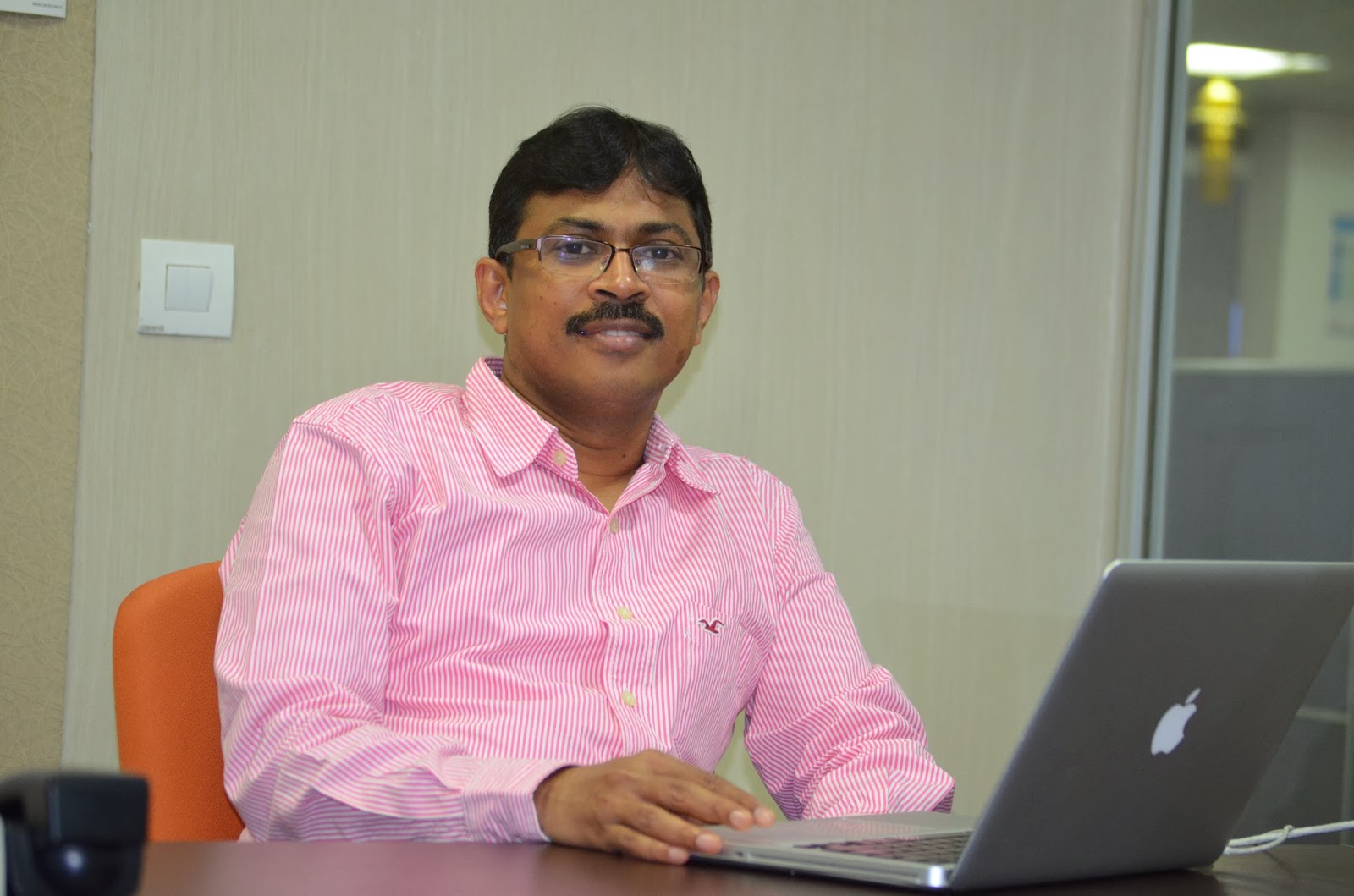 The entrepreneur starts young and early, and so did Chennapa Naidu Darapaneni. Born in the historic town of Udayagiri, into a farmer’s family Mr. Naidu turned out to be the first entrepreneur of his family. Inquisitiveness and high-energy were the two wheels, that he rode on, while his instinct was his navigator.

The first job he took was for a small company which made water level indicators for tanks, in 1993. He was not only working behind the scenes soldering the equipment but also involved himself in delivering and installing the apparatus. It’s amusing to note that he represented it in an exhibition as well, with absolutely no knowledge of Hindi at that time and pulled it off well! He chose to be the face of his product.

He went on to pursue his B.Tech at JNTU Anantapur, where the entrepreneurial spark lit-up. In his free time, he chose to read. But he soon realized that it was a tough choice, as the college was remotely situated and there was no means to cater to his need. While others chose to complain, he saw an opportunity. And hence began his journey – finding opportunity in the problem. He got along with his friends and started the “Friends Bookstall”, wherein he would sell and rent books.

It was a good start, as they soon got into expansion, selling magazines and other stationary. Making it a one-stop shop and drawing more customers. It was New Years Eve and they decided to sell cards. The cards found no takers. But the tables turned around when they clubbed 3 cards and sold them at a better price. Lesson learnt – Package sells better than the product.

The venture molded itself into “WE serve you” (WE stands for Would-be Engineers, catchy!). Now, this was a step ahead – they got into services, printing pamphlets and delivering the goods. It was now time for the entrepreneur to move to the big city. In 1997, he moved to Hyderabad looking out for opportunities.

He looked around, gauged the market and trained himself in AS 400. This soon landed him into a job at Metamor Global Solutions. As he put his best into the training and learnt well, he saw himself turning into an instructor in no time. He soon started training batches of 200-400 people, earning almost a lakh rupee per month. But, as he knew this market was seasonal, he kept up with his job.

Later, in the year 1999 his job with Hexaware Technologies took him to the USA. But it couldn’t guarantee his stay there. Soon, recession started rocking the boat and the return to homeland was the only option. However, he placed himself into a job in 3 months and once again – another problem sighted, another opportunity discovered.

Having found a job for one self, he now started to do the same for friends and acquaintances. And that’s how Versant Technologies was born, in 2000. Of course there were kick backs and discouraging voices. He was told that it was a bad idea to start when the market was on its knees. The actual idea was to be there when nobody else could and the instinct said “go for it”. And voila, Versant got on its wheels, full throttle and in 3 yrs picked up to the turnover of a million dollars.

Laterally and gradually by 2005, Versant Technologies moved into projects. Once again, he did not shy away from being the face of his product himself. He now wore the hat of a Project Manager and handled them himself. He did not actually feel there was a need for him to be PMP certified as his experience certified him enough.

The offshore office started shortly and he decided it was time for him to head home. When Naidu left for USA he said to himself that he is going to return one day. It would either be after 10 years or when he hits his first one crore mark.

And so he returned home and started with his operations at Versant Technologies office in Hyderabad, in 2007. He fuelled his project with a loan of 2 crores and rented out a 16000 sqft office (at a very high rent in Whitefields, Kondapur). Oracle Retail Implementation was one of their initial projects, which kicked off well. But then there was a dip in the market again, in 2008 and the going got tough.

By 2009, when he drained out all his reserves, he soon realized that he was in a very tight spot. He had his new venture dangling in the air, he had to pay his employees, and he had to pay for his loans and all this, when the market itself was hopeless. Also, he had nothing at his hand.

And then the waiting game started. For 6 months all he could do was wait. There was a time that he could not pay his monthly installments, but he made sure that he communicates the right story and right status regularly to his stake holders. It could have been a U-turn for Naidu – but, there was no plan B. He knew that entrepreneurship is a school where quitters need not apply.

He went by his instinct and stuck to his game. All the while keeping his company, his employees and a high moral. Its remarkable to note that Naidu considers his employees to be key to his business and attributes success to them. As per him, business is all about people. The people you work with and your relationship with them goes a long way. And so it did. One of his previous clients offered a huge loan for absolutely no security. This formed his new reserve and a great relief too. The business got back into the fast lane soon.

But, as we know that idling was not his style, he was on frequent look out for learning and opportunities. He realized that a greater part of learn and feel of the market pulse comes from attending the conferences and the workshops. But he stumbled upon the fact that people, by large, learn about an event once it comes out in the newspaper, the following day. He also felt a need for better means of rapport building within these events. Another thing about events is – they always happen. And hence, MeraEvents was born.

He now manages MeraEvents and Versant Technologies together. We might note that one is a product based and another is a service based company – which means 2 different and separate approaches. But he juggles them with great ease. Versant has now found its place into Aspire Systems, a Chennai based company with strong presence in USA, UK with 1100+ employees but he is obliged to keep up its identity for Versant Technologies. Above all, he is happy for his employees as he sees a great opportunity for them in this deal.

Naidu makes a very simple point by saying – “Nobody asked YOU to be an entrepreneur”. It’s your choice, and if you choose to be one, make sure that you justify every role that you take. An entrepreneur’s journey starts with the ability to take risks which grow in size and number, and in no time leads to a place which is about taking bigger responsibilities. It’s very important to keep the eyes and ears open. For, you begin with a vision and soon you will learn many a lesson.

Naidu always believed in being the face of his product and interacted directly with his customers. But, if he finds someone making a better pitch, he lets him lead. Throughout, there was no hard and fast rule he played by. His plans were always market based and dynamic. He believes that the market is never static and hence, it’s very important to be very accommodating and adaptable to the market situations.

The funding itself has a story of its own. It all began with a little sum of pool-in money among friends in college. The next, being savings from the salary. Then it was one company feeding another.

There was also a time, when he had to pledge his wife’s jewelry for loan. But throughout his journey Naidu always believed in keeping his act clean. There was a time when he had to pay heavy penalty for the mistakes done due to lack of knowledge and a few misses by his accounting team. A quack CA could have saved him some money; instead, he paid the penalty fair and square. And soon, got into learning the tax-structures, employee payment structures, the registration formalities etc. An engineer by qualification, Naidu is very comfortable with quick-books now – thanks to the roller coaster ride.

Naidu’s romance with entrepreneurship is an open-book and he wants to keep it that way.

Kiran has around 8 years of corporate experience in companies like GE, Dell and IBM in diverse roles. With Masters in Industrial Psychology, she is passionate about travelling and writing. She blogs regularly at http://kiranmortha.blogspot.in/