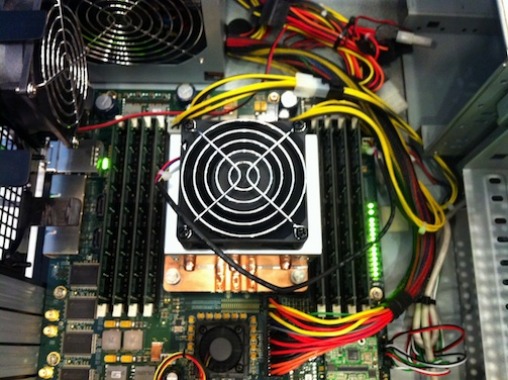 Intel researchers are working on a 48-core processor for smartphones and tablets, but it could be five to 10 years before it hits the market.

“If we’re going to have this technology in five to 10 years, we could finally do things that take way too much processing power today,” said Patrick Moorhead, an analyst with Moor Insights and Strategy. “This could really open up our concept of what is a computer… The phone would be smart enough to not just be a computer but it could be my computer.”

Enric Herrero, a research scientist at Intel Labs in Barcelona, said the lab is working on finding new ways to use and manage many cores in mobile devices.

At this point, researchers are working to see how to best use so many cores for one device.

“Typically a processor with one core would do jobs one after another,” Herrero toldComputerworld. “With multiple cores, they can divide the work among them.”

He explained that with many cores, someone could, for instance, be encrypting an email while also working on other power-intensive apps at the same time. It could be done today, but the operations might drag because they’d have to share resources.

Tanausu Ramirez, another Intel research scientist working on the 48-core chip, said that if someone was, for example, watching a high-definition video, a 48-core chip would be able to use different cores to decode different video frames at the same time, giving the user a more seamless video experience.

Ramirez also said that instead of one core working at near top capacity and using a lot of energy, many cores could run in parallel on different projects and use less energy.

“The chip also can take the energy and split it up and distribute it between different applications,” he added.

Justin Rattner, Intel’s CTO, told Computerworld that a 48-core chip for small mobile devices could hit the market “much sooner” than the researchers’ 10-year prediction.

“I think the desire to move to more natural interfaces to make the interaction much more human-like is really going to drive the computational requirements,” he said. “Having large numbers of cores to generate very high performance levels is the most energy efficient way to deliver those performance levels.”

Rattner said functions such as speech recognition and augmented reality will push the need for more computational power.

“If it’s doing speech recognition or computer vision… that’s very computational intensive,” he added. “It’s just not practical to just take sound and pictures and send it up to the cloud and expect that some server is going to perform those tasks. So a lot of that will be pushed out to the client devices.”

Rob Enderle, an analyst with the Enderle Group, said being able to have different device functions, as well as apps all running on their own cores would be a great advance. “You move to a massive multi-core model and you’ll have massive multi-tasking,” he said. “You can have some big apps running and nothing will steal performance from each other. You get that huge range of performance across the spectrum and you get the benefits of things you can’t even run on a PC now. Plus you’d get a potential low battery drain.”

Enderle also pointed out that running so many cores would enable the phone to scale way down when it’s just sitting in someone’s purse or pocket and then scale well up when it’s being used.

One issue the researchers are running into, however, is making sure there is software for small mobile devices that can take advantage of so many cores.

“This is a more limiting factor,” said Herrero. “We need to modify how operating systems and apps are developed, making them far more parallel. Now, [having] cores doesn’t matter if I can’t take advantage of it.”

Enderle agreed that it’s going to be critical to make sure the software is keeping up with the advances in the hardware.

“There aren’t many apps now to light up eight cores, let alone lighting up 48,” he said. “Even on the PC now, it’s really unusual in an 8-core machine to light up more than six cores. Writing for massive multi-core… Well, we haven’t even really started to do that yet.”

Moorhead, though, has faith that by the time the hardware is ready, the software will be, too.

“Five to 10 years is somewhat of an eternity in technology time,” he said. “If we’re going to have this technology in five to 10 years, [the smartphone] won’t have just one camera. It would have two to three cameras that are always on. It could build a three-dimensional map of what it’s looking at and do object recognition. You could finally do things that take way too much processing power today.”

Zeus Kerravala, an analyst with ZK Research, said there simply is never a shortage of demand for processing power.

And in 10 years, when a 48-core smartphone or tablet chip could be ready for market, devices likely will be in need of that boost.

“I suspect in 10 years, the devices we carry will be continually using any information available to them to make better decisions,” said Kerravala. “So a continuous stream of location, identity, ad-driven information and presence status will all continually be calculated to help us do the stuff we do better and faster. And I would think you’ll need multi-core to do that in 10 years. Whether it’s 36 or 48, who knows.”

Moorhead also projected that with that many cores and smarter software, our smartphones could someday be our main computers.

“My one compute device is in my hand and when I walk into my office, it automatically and wireless connects to my 30-inch display,” he explained. “I have touch, a keybord, a mouse and voice to interact with it… It changes the whole concept of what it is and what it can do.”