Apple’s iPhone 5 parts have leaked here and there over the past weeks and months, but it looks like all the parts have been collected and we’re now able to see what is most likely Apple’s next-generation iPhone. While a lot of people weren’t a fan of the two-tone color, the latest parts show that the metal panel on the back of the device is the same material as the metal band around the iPhone 5, and it looks much better. Today, repair shop iLab has posted its own photos, but these images apparently showcase a fully assembled body. The new photos give a clear look at what a black, fully-assembled next-generation iPhone might look like when it ships to customers this fall. The repair shop also has some photos of other individual components like home buttons and volume keys.

Macotakara has posted another video of purported next-gen iPhone parts to its YouTube channel: 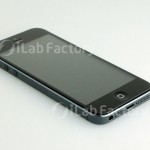