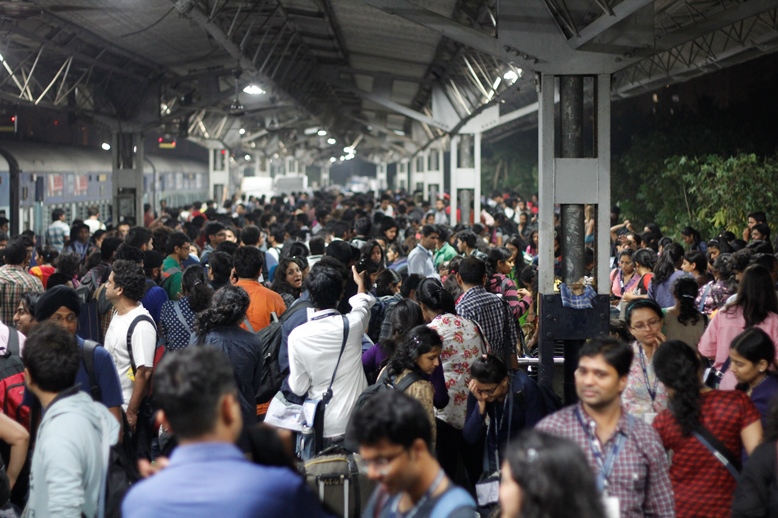 Jagriti Yatra – 8,000 kms journey across 15 cities to get inspired by change-makers from across the country Earlier, Nitin Tailor & Anvita Dixit who were selected for Jagriti Yatra 2013 penned down their thoughts.  As the train reached Bangalore on the 4th day, the Yatri’s had lot of learning as they listened to their Bangalore role model Subroto Bagchi, followed by a panel of outstanding achievers including Abhinav sinha (Eko financial services), Sachin Bansal (Flipkart), V Bishor (Ubio) and SushmitaMohanty (Earth 2 Orbit).

Jagriti Yatra, which started as an annual train journey in 2008 to bring all budding entrepreneurs together, has entered its 6th year. About 450 motivated young leaders who are on an exciting 8,000 kms journey across 15 cities learn and get inspired by change-makers from across the country.

True to its spirit of reaching the remote corners of the country, an overwhelming 56 per cent of Jagriti Yatra entrepreneurs are from rural and semi-urban areas. About 47 per cent of these start- ups are based in small towns and villages of India.

To facilitate this process, Google promised to grant three winners from the Jagriti Yatra B-pan competition ‘Biz Gyan Tree’ a sum of Rs 1 lakh each while Coca-Cola agreed to grant Rs 1 lakh to one such winner. Rolls-Royce (engines) and National Insurance Company Limited have also partnered with the Yatra this year as Silver Partners alongside Coca-Cola to “Build India through Enterprise”.

In the published Impact Report, in five years, the Yatra has created an average of 50 start-ups in a year. About 44 per cent of them are in the knowledge sector, 15 per cent in information and communication technology and 10 per cleantech in the energy and agriculture sector. The rest are in the myriad sectors of healthcare, housing, water and tourism.

The Yatra has also been replicated in the US, France and other states of India by former Yatris.

Gunvant Jain, who runs an Active learning centre Shikshalaya in Mumbai,said, “Yatra made a huge impact in my life; it raised questions like – what is it that I want to do with my life? Yatris along with the role models have been truly inspiring and motivating even after the Yatra. I couldn’t imagine starting a venture so smoothly without their support. The changed mindset after the Yatra has impacted various decisions in my life – I’d say for good.”

When the train halted at Bangalore to meet their changemakers, we spoke with Priyanka Shylendra who was a facilitator at last year’s Jagriti Yatra. Priyanka, who is Director – Operations at Gift Your Organ Foundation has more actively taking part in her mother’s venture Genesis Art Gallery after her return from the Yatra. On quizzing her about the Yatra, she says, ” It is something you need to experience. Two big things I got from the Yatra – Looking at our country. Going to rural India is completely different. There’s so much talent out there, we are not able to get in touch with them.Second, the train journey – just living on the train, it’s awesome!  There are people from across the country in the Yatra. You build great networks, and things get done far easily due to the connections made.”

Zor Hamilton, PR Lead & Program Co-ordinator, Startup at Jaaga is part of this year’s Yatra. When we asked her on how the experience was, she readily responds, ” It’s been 4 days so far and good!  Being an expat, this journey is teaching me what’s happening around India”.  When I ask her on whether she plans to startup after coming back from Yatra, she quips, ” I think there is lot of emphasis on people trying to find solutions, to become entrepreneurs after the journey. However, I like to be in the supporting role for Entrepreneurship, and think it’s perfectly okay to do so! ” Catch her posts on Jaaga, as she travels through the country.

The Yatra has an interesting mix of people attending – from rural areas, urban and foreigners.  Yatris met with Prashant Mehra, Chief Cool Dude at Mindtree who has come back to India to create a difference in RagPicker’s lives.  A Project Manager at ‘I Got Garbage’ project initiated at MindTree, he says, “Bangalore generates 1.5 to 2 per cent of all of India’s garbage. That corresponds to 600 trucks per day that is brought outside  the city to a village where it is dumped. This means that Bangalore alone is killing a village per year. The commercial value of the garbage produced is a quarter million per day, which means 10$  per rag-picker, that would be a revolution for them increasing their earnings by 10 times”.

We traced an interesting blog, that covers the day-to-day happenings at Jagriti Yatra, and makes up for a yatri’s experiences throughout the journey. Read it here.