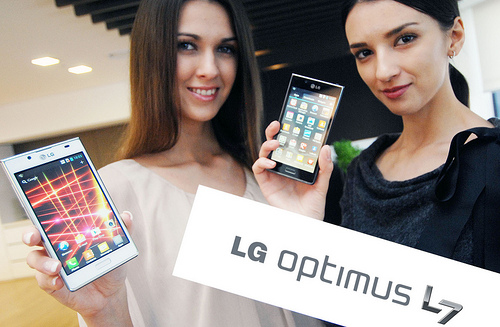 With the latest version of Samsung’s 5-inch Galaxy Note set to be unveiled this month, LG has announced that it will begin selling its own ‘phablet’ — the Optimus Vu – in international markets next month, when the handset will arrive in selected countries across Europe, Asia, Middle East/Africa and Latin America – though the US is an interesting omission.

The phone-cum-tablet launched in Korea in March, becoming available in Japan this month, and it has racked up 500,000 sales to date, which the company says shows “a public acceptance of its form-factor.”

The international version of the 5-inch quad-core device — which will support 3G rather than LTE as it does in Korea — will be powered by an Nvidia Tegra 3 processor and includes an 8-megapixel rear camera, 1.3-megapixel front facing camera and 32 GB of internal memory.

The device will also ship with a new version of note-taking feature QuickMemo, which LG released for its Optimusic L Series of phones recently, and Notebook. These two programs will take advantage of the larger screen size and its display, LG says.

“When paired with the high-resolution 5-inch, 4:3 ratio IPS display, the Optimus Vu: becomes something special –- a device that’s both pocketable and spacious,” a statement announcing the launch read.

The 5-inch smartphone market (or opportunity for mini-tablets, depending on how you fill your glass) is one that is growing strongly, and LG president and CEO Dr. Jong-see Park believes the Optimus Vu is unique, even in its niche:

“The different form factor makes Optimus Vu: unique even in the 5-inch smartphone category which we expect will catch on once they become more widely available,” he said.

LG recently blasted past 5 million LTE device sales and it revealed that the Optimus Vu has been the biggest seller within that 4G line-up. The company has previously spoken of its desire to increase its market presence overseas — it currently holds just 3.6 percent of global smartphone shipments, down from 6.9 percent in 2011– and the Optimus Vu is likely one of its key releases.

It doesn’t have the international recognition of Samsung’s Galaxy Note, which hassold 10 million units since launching last August, but LG will likely settle for even a portion of its rival’s impressive figures.

Though it would be unlikely to include phone services, Apple’s rumored smaller form iPad could post a significant threat to the 5-inch smartphone market, if it does launch. A launch event for the next-generation iPhone is said to be taking place on September 12, raising the possibility that the ‘mini iPad’ may also launch that month – the same time as the international Optimus Vu and the next Galaxy Note.