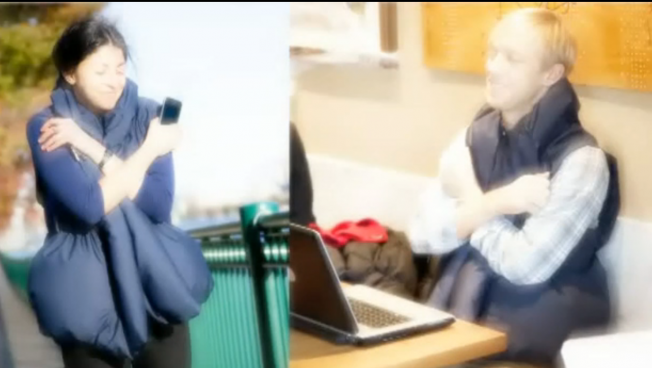 Designed by MIT researchers, the Like-A-Hug coat senses when a Facebook friend “likes” your picture of a sweater-wearing cat or wistful update about finding true love. Then, via some complicated electronic mechanism that’s not quite clear, it rewards the wearer by filling with air to mimic a “hugging” sensation.

So basically this is an article of clothing that broadcasts the owner’s craven need for approval, as well as suggesting his or her crushing failure to attract hugs from flesh-and-blood beings. Why does the world need this artificial snuggle-shell? Explains one of its creators, Melissa Chow:

Like-A-Hug is a wearable social media vest that allows for hugs to be given via Facebook, bringing us closer despite physical distance. The vest inflates when friends ‘Like’ a photo, video, or status update on the wearer’s wall, thereby allowing us to feel the warmth, encouragement, support, or love that we feel when we receive hugs. Hugs can also be sent back to the original sender by squeezing the vest and deflating it.

The Like-A-Hug gizmo could be a boon for people who can’t stand hugging – when approaching hands-on associates, just halt at a distance of a couple feet and ask them to log into Facebook. But for everyone else, it’s plain silly. A “like” is not good enough for you? You need the sensation of a precious embrace to feel that your two-line status update is appreciated?

Via: The Atlantic Cities