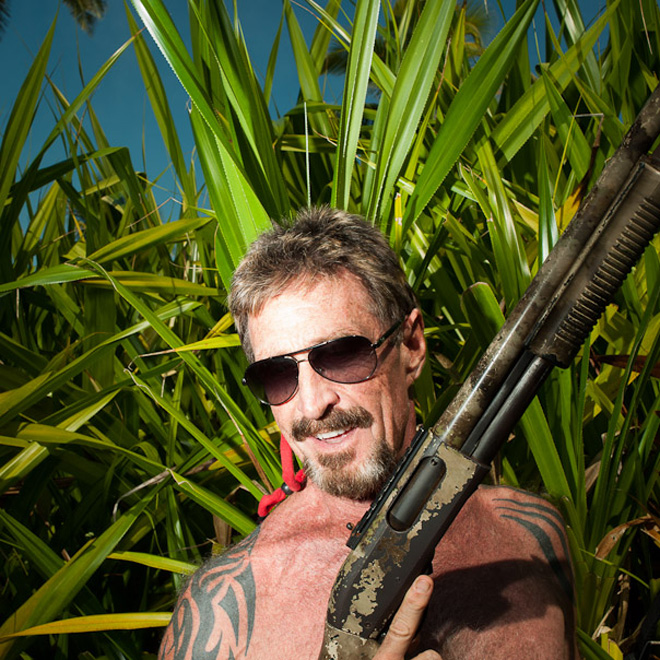 As Belizean police combed the property of expat antivirus pioneer John McAfee Sunday afternoon, McAfee was closer than they could have known. He’d seen them coming, and says he hid — burying himself in the sand with a cardboard box over his head so he could breathe. “It was extraordinarily uncomfortable,” he says, in an exclusive interview with Wired. “But they will kill me if they find me.”

McAfee, 67, is the prime suspect in a murder discovered Sunday morning in Belize. Convinced that he’ll be killed if he’s taken into custody for questioning, the millionaire antivirus pioneer has gone into hiding somewhere in the Central American nation, where he moved in 2008 to retire. Starting at 10:30 this morning, Belize time, he has been calling to tell me his side of the story.

The homicide victim is McAfee’s neighbor, Gregory Faull, a 52-year-old American expatriate, who, like McAfee, lives on Ambergris Caye, an island off the coast of Belize. According to police, Faull was found face up in a pool of blood with a single gunshot wound to the back of his head. Authorities found a single Luger brand 9mm expended shell at the scene.

Asked what he knows about the shooting, McAfee said, “Nothing — other than I heard he had been shot.” In fact, McAfee added, he’s worried that whoever shot Faull may have actually been gunning for him. “I thought maybe they were coming for me. They mistook him for me. They got the wrong house,” he said. “He’s dead. They killed him. It spooked me out.”

If McAfee is involved, it may trace back to the half-dozen dogs McAfee keeps at his beachside compound. Faull, like other McAfee neighbors, had been complaining about the dogs and reportedly filed a formal complaint about them with the mayor of the nearby town of San Pedro last week. According to McAfee, the dogs were poisoned on Friday night.

McAfee blames the death of the dogs on the Belizean authorities, with whom he has been tangling for months. In April, the Gang Suppression Unit raided his property on the mainland and accused him of manufacturing methamphetamine and possessing unlicensed weapons. Those charges were dropped but McAfee believes that the government has a vendetta against him. He believes the death of his dogs was just another attempt to get him to leave the country.

“The coast guard dropped off a contingent of black-suited thugs at 10:30 tonight at the dock next door,” McAfee wrote me in an e-mail Friday night. “They dispersed on the beach. A half hour later all of my dogs had been poisoned. Mellow, Lucky, Dipsy, and Guerrero have already died.”

For months, I have been investigating McAfee’s claims against the government and the government’s charges against him. While I was interviewing him in Belize in August, one of his neighbors complained about the dogs. Anytime someone walked by on the beach, the animals would charge the fence and bark. In addition, McAfee employed a contingent of armed guards to protect the property. They walked the perimeter carrying shotguns. The neighbor was scared. The next morning, McAfee hired a carpenter to build another fence to keep the dogs away from the beach.

When I spoke to McAfee Saturday morning, I asked him if he thought a neighbor might have been involved in the demise of the dogs given that they had voiced complaints. McAfee dismissed the possibility. “They’re still dog lovers,” he said. “And I talked to them this morning. No one here would ever poison the dogs.”

‘You can say I’m paranoid about it but they will kill me, there is no question. They’ve been trying to get me for months.’
— John McAfee

He spoke specifically about Faull. “This is not something he would ever do,” McAfee said. “I mean, he’s an angry sort of guy but he would never hurt a dog.”

Faull, who moved to Belize from central Florida, has had at least one run-in with the police himself — in the U.S. In December 2009, the 5-foot-11, 220-pound Faull was arrested by the Seminole County Sheriff’s office and charged with aggravated battery.

Marco Vidal, the head of Belize’s Gang Suppression Unit, says that McAfee is a “prime suspect” in Faull’s death and rejects McAfee’s assertions that the GSU is framing him. “Absolutely no truth,” Vidal says. “This guy amazes me every day. We don’t have anything personal against Mr. McAfee. There is no need for us to poison dogs.”

The police spent several hours Sunday searching for evidence and confiscated a number of weapons. While I was interviewing him over the summer, I observed 9mm Luger ammunition sitting on his dining room table, but McAfee says both of his 9mm guns were confiscated by the police during the April raid.

McAfee is currently on the run from the police. “Under no circumstances am I going to willingly talk to the police in this country,” he told me this afternoon. “You can say I’m paranoid about it but they will kill me, there is no question. They’ve been trying to get me for months. They want to silence me. I am not well liked by the prime minister. I am just a thorn in everybody’s side.”

Nonetheless, McAfee insists he has no plans to leave the country. “I like it here,” he says. “It’s the nicest place on earth.”

The complete story of McAfee’s journey from high-profile tech entrepreneur to accused murderer will appear in Wired’s January issue.