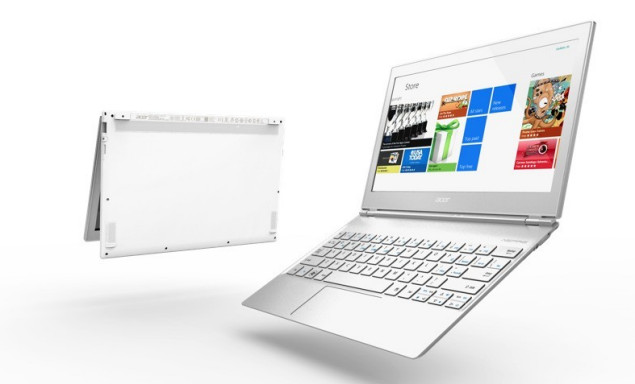 As the time for the release of Microsoft Windows 8 is approaching fast, many manufacturers have announced devices based on Windows 8 operating system that magnificently dissolve the borders between traditional laptops and touch-enabled devices. Following is a list of ten such laptops that promise to bring a paradigm shift to user experience. The HP Spectre XT Touchsmart boasts of a full-HD 15.6-inch bonded IPS display, which is fully touch-enabled. It is 17.9 mm thick and weighs around 2.16 kg. Apart from the standard USB 3.0, HDMI and Ethernet ports, this laptop has a Thunderbolt port that is still a novelty for PCs. The Spectre XT is available with Intel Ivy Bridge Core i5 and i7 processors, with an option between a 500 GB HDD (with 32 GB flash cache) and 256 GB SSD. The Asus Taichi convertible notebook is a dual-display device, with IPS HD displays both on the front and rear side. In the traditional laptop mode, it has a backlit QWERTY keyboard and trackpad, while the other side is a fully functional Windows 8 tablet. The two screens can be used independently, or set to mirror each other. There is a 5 MP rear camera, and an HD counterpart at the front. The Taichi features 4 GB RAM, Core i7 Ivy Bridge processor, SSD storage, USB 3.0 and micro HDMI. It is available in two screen sizes: 11.6 and 13.3 inches. The Dell XPS Duo 12 convertible notebook features an innovative hinged display that, unlike the more prevalent dock-out specimens, can simply be flipped and closed over the keyboard to operate in tablet mode. The aluminum bezel framed display is a 12.5-inch full-HD touchscreen. In keeping with the entire XPS range, the build quality is high, with the screen being surrounded by carbon fiber and a magnesium alloy chassis. The Windows 8 based XPS Duo 12 will feature a Core i7 chipset, powered by Qualcomm’s Snapdragon S4 chip. This Dell Laptop price is not announced as of now. The Dell Latitude 6430u is a business-use Ultrabook featuring a 14-inch 1366×768 pixel screen, options in Ivy Bridge Core i3, i5 and i7 processors, 256 GB solid state drive and up to 8 GB of RAM. Focused on the enterprise market, the 6430u runs the Intel vPro platform for easy data management. In the absence of a touch screen, navigation is supported by the trackpad and a pointing stick amidst the keys. Expected to be available along with Windows 8 by the end of October 2012, this Ultrabook is 0.82 inches thick and weighs 1.67 kilograms. The next generation Samsung Series 5 and Series 7 laptop/tablet hybrids are 11-inch Windows 8 devices featuring latch-on keyboards. While the Series 5 runs on an Atom-based Clover Trail processor, the Series 7 is powered by Intel’s i5. S-Pen support, a la the Galaxy Note, is available with both. They will ship after the launch of Windows 8, the Series 5 with 64 GB SSD and 2 GB RAM, and the Series 7 with 128 GB SSD and 4 GB RAM. While the keyboard is included in the Series 7 package, Series 5 comes with the option of not purchasing it. Samsung’s next generation Series 9 laptop is a 13-inch Ultrabook featuring Windows 8 on a remarkable matte-finish 2560×1440 display. The Acer Aspire S7 is the third offering from the company in its Ultrabook line. The S7 will be available in two configurations, one featuring an 11-inch screen and the other a 13-inch one. Both have 1080p IPS screens and 4 GB RAM. While the smaller model has 128 GB SSD and Core i5 CPU, the 13-inch version carries a choice between 128 and 256 GB SSDs, and Core i5 and i7 CPUs. Both models come bundled with micro-HDMI to VGA dongle, USB to Ethernet adapter and, unusually, a carry case. The 11-inch S7 weighs about 1 kilogram, and the 13-inch model 1.3 kilograms.

The Sony Duo 11 is a Windows 8 hybrid that sports a unique slider screen. The 11.6-inch, 1080p touchscreen slides on a hinge, making this a convertible tablet with a difference. In addition, the Duo 11 comes with a stylus that is aided by a precise digitizer. This convertible will be available with Core i3, i5 and i7, with 128 GB or 256 GB SSD, NFC, HD cameras both at the front and the rear, and GPS.  Although the price and more detailed specifications are awaited, the Duo 11 is expected to be, to paraphrase a reviewer, “a beast of a slate for its size.” The Toshiba Satellite U845W stands out for its ultra-wide 21:9 aspect-ratio screen, with the company proclaiming it the first laptop in the world to embrace the cinema-style size. The screen measures 14.4 inches and has a 1792×768 pixel resolution. It houses a 1.7 GHz Core i5 CPU, 6 GB RAM, and a 500 GB hard drive coupled with 32 GB SSD. The U845W also features three USB 3.0 ports, an Ethernet port and HDMI output, apart from a memory card reader at the bottom lip of the device. Come the launch of Windows 8, the U845W that currently runs Windows 7 will undergo a makeover for the new OS. The Microsoft Surface for Windows 8 Pro is a heavy-duty tablet hybrid on par with Ultrabook standards. It has a Core i5 processor, 64 GB or 126 GB storage, USB 3.0 ports and 1080p resolution on a 10.6-inch ClearType display. The body is composed of vapor Mg, is 13.5 mm thick and weighs 903 grams. The Surface for Windows 8 Pro comes with two kinds of keyboards, one touch-responsive and the other physical, which double up as magnetically attachable covers. The user experience with Windows 8, given Microsoft’s own involvement in the hardware, is expected to be flawless.

Be it convertible laptop/tablet hybrids or Ultrabooks, the market is gearing up for Windows 8 in a hungrily anticipatory manner. The technology on display, as evidenced by the above examples, is nearly futuristic and extremely diverse, as is expected when competition reaches unprecedented levels. Come October 26th, Windows 8’s expected launch date, the curtains will finally rise.