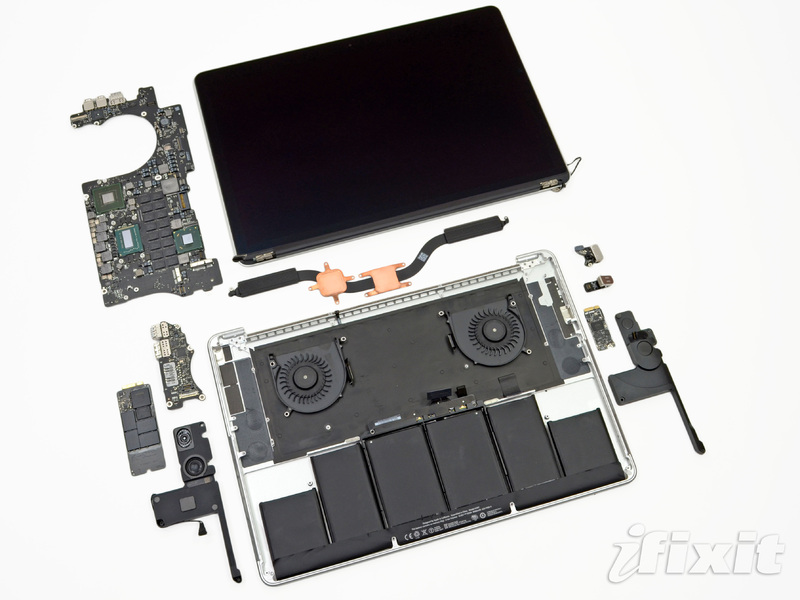 The terrific guys at iFixit have done it again. Apple may have showcased the insides of it new MBP (MacBook Pro) but these guys didn’t seem satisfied.

If you’re not familiar with iFixit, it’s like the Wikipedia of do-it-yourself repair manuals for all manner of technological goodies. Their user-edited repair manuals can help you fix all sorts of problems that might otherwise require you to send your gadget off for repair, or chuck it entirely.

Every gadget that iFixit breaks down gets a reparability rating on a scale of 1 to 10, with 10 being most easily-reparable. The new MacBook Pro scored a 1. Just as with the MacBook Air and their iOS devices, Apple has taken steps to make sure that you can’t go mucking about inside their products.

Unfortunately, that makes it much harder to extend the computer’s life. Even common things like upgrading the RAM, the Hard Drive or changing the battery is difficult with the next generation MacBook Pro. The SSD is proprietary and difficult to access, the RAM is soldered onto the logic board, and the battery is glued – literally glued – to the aluminum frame.

To start with, Apple has brought the same pentalobe screws they started putting on iOS devices a couple years ago to the MacBook Pro. The reason for this is simple: it’s a little harder to find screwdrivers to fit these screws than your standard Philips or slotted variety. As such, these screws are Apple’s first line of defense against the would-be tamperer/upgrader.

Once the outer shell is removed, we see what the new MacBook Pro looks like on the inside (the series of flat blocks that takes up most of the space is the battery). The good news was that the battery hasn’t been screwed but we later found it it actually has been screwed, literally. Apple has glued the entire battery pack to the aluminium board below which is almost impossible to take off without ripping apart something else.

After a little work, they managed to extract the logic board. They’ve highlighted several internal components. The red box marks the RAM. As previously noted, the RAM is soldered to the logic board, which means there’s no upgrading. If there’s even the slightest chance you might ever want the full 16GB that Apple offers for the new MacBook Pro, go ahead and max it out when you order. Once you’ve got it, you’re stuck with it.

If you think it couldn’t get worse, then you are wrong. The surprisingly awesome Retina Display which gives this device a hefty price tag cannot be repaired. In case you have it damaged the entire thing has to be replaced which includes the camera, the WiFi and Bluetooth cards too.

So here are all the final pieces of the new MacBook Pro out for one last photo:

You can have a look at all the photos of the teardown and the steps to do so at the iFixit website.