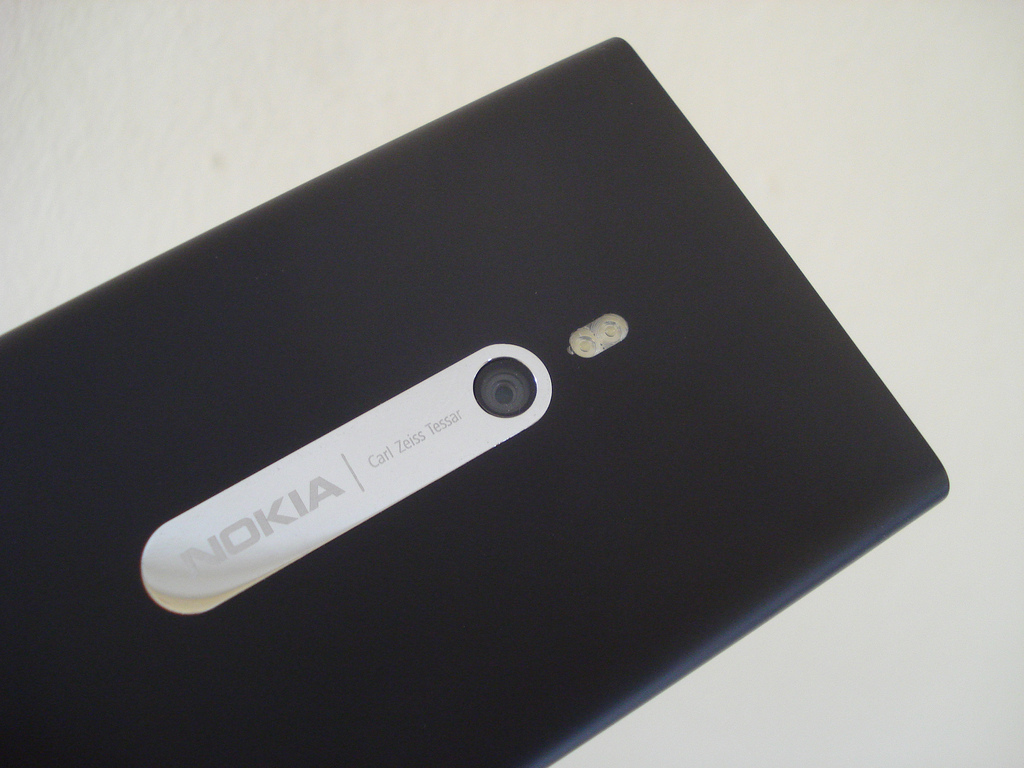 Nokia seems to be playing the number game; the company has not yet finalized the name for its flagship model, the EOS model. There have been several rumors flowing the cloud today, Nokia ha been able to make a firm decision with the name of the model.

Though the name is not finalized the images of the model has leaked through the evleaks, the images is that of the phone the front view and the back view. The camera of the smart phone is taking all the highlights. In fact it’s the camera that is being given utmost importance. The company does not even seem to be interested in revealing the features of the smart phone.

All the highlight is being taken by the camera that the smart phone sports, yes, of course, the smart phone is now called Lumia, therefore you can be sure of the fact that smart phone would be powered by the Windows 8 operating system for smart phones.

The front view may get you an opinion that the smart phone the EOS model of Nokia is a renovated version of the Nokia Lumia 920. The display that takes up a major part of the space with the capacitive keys below it. Well, that is the general form seen in most of the smart phones today. When you observe closely then you will notice the difference. There is a Nokia Pro Cam App that is seen on the smart phone. So that gives you enough hint that the camera is the major feature of the smart phone. The company seems to be interested in manufacturing a camera but then it may not have been interested to let go of the product that brought the company all the fame. Therefore what seems to be coming out now is a camera is the disguise of a smart phone. Had the specifications of the smart phone also been enhanced along with the camera then one give it a second thought here but the other specifications of the smart phone just seems to have taken a back step. If they were improvements then it would be reflected in the news, but then besides the extremely hyped 41 Mega Pixel sensor camera there are no updates.

Moreover the company has been pulled the chord about the upcoming 41 Mega Pixel camera sensor, first and foremost it was supposed to released somewhere last year under the Symbian-Belle operating system, but then the idea was dropped because of the complaints that the operating had on it name. Well, the company did make a good choice as the smart phone would go unsold had it been released under the Symbian-Belle operating system. So, the only upgrade that seems to be onboard for the smart phone is that it is powered by Windows 8. The camera still remains the best part.

The latest reports suggested that the smart phone will be officially launching towards the end of the second week of July, and the leaked images have confirmed the massive camera that the smart phone would be coming up. Then again, even if the Nokia EOS really pulls up, is it going to be accepted, for the other companies are not anywhere far behind. You have already seen the Samsung Galaxy S4 Zoom, that is an insane smart phone by itself. The 10x zoom it carries has created havoc in the industry moreover then other specifications of the smart phone are not anywhere far behind. They are almost on par with the most successful and the officially crowned best smart phone as of May 2013, the Samsung Galaxy S4, there is no doubt about that. So what is actually in the industry is not known, there are a missing chords that needs to be put together. Then there is another major innovative feature showing up, the Ultra Pixel camera, which is like a missile when compared to these small weapons, the Ultra Pixel camera, if accepted by the masses, may blow the market, it could be fatal when it comes to the shares of the other companies, and this innovation is from HTC, the Taiwanese company that is on a mission to topple Nokia of its third position in the market and raise its bar in the stock market.

Well, coming back to Nokia’s flagship model, the EOS model, which is apparently the Nokia 1020,would include some extra controls with the camera, as mentioned, it is still te camera in the scene. These extra controls are set up in the smart phone to keep a call on the 41 million pixels that the camera would be projecting.

The other facts that were revealed with the leaked image shows that the smart phone in covered under the AT&T branding and if reports are to believed then there would be more information coming up somewhere on the 11th of July and there woud be a few videos being released as well.

As far as the release dates are concerned, the officials have confirmed that the Nokia Lumia 1020, the flagship model to be more precise here would be seeing its launch on the July 11th in the New York city. All other information with regard to the specification and the features of phone would be available only then. The fruit of patience is always, all the Nokia patriots out there, this may be the moment you are waiting for, Nokia might just spring back into business sooner or later and then you will have favorite brand flashing its name as it rests on your palm.

[The above article has been contributed by Ajay Chauhan. Ajay is an expert is handsets and technology reviews and works at 91Mobiles and has done extensive research to get the Nokia Lumia 1020 Images.]