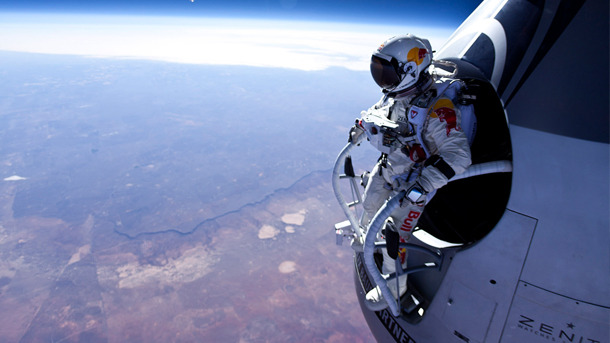 It’s Sunday in October: That means football, presidential politics and Sunday brunch. But never mind any of that.

If you were watching the YouTube live coverage of the Red Bull Stratos, in which skydiver Felix Baumgartner dropped from near-space (23 miles high) back to the Earth’s surface, you might have seen another stratospheric number: 8 million. At the peak of the YouTube coverage, that was the number of concurrent viewers from around the world watching the successful feat.

YouTube would not officially confirm the number of overall viewership. (Keep your eyes out for a YouTube blog post.) Whether that is the largest livestream YouTube has ever conducted may not completely confirmed, but it is pretty clear.

For instance, YouTube has said the first presidential debate this year was “one of YouTube’s biggest live-stream events ever” and “ millions of live streamedviews of the debates, and one of the highest number of concurrent streams ever for a YouTube live stream.”

As for the Olympics — another candidate — YouTube reported: “At peak, YouTube delivered video for more than half a million livestreams at the same time. That’s 5X the capacity of Wembley Stadium.”

So, this is a big one. Likely the biggest ever. By a lot.