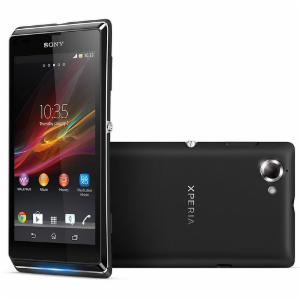 Sony has recently added a new Android smartphone to its Xperia series. Having a new design as compared to other Xperia handsets, Sony Xperia L is a new mid-range phone that features 4.3 inch touchscreen, 1Ghz dual core processor, Android 4.1, 1GB of RAM and 8GB expandable storage. It sports a 8MP camera that gives a good picture clarity. These are just a few features. Lets have a look on Sony Xperia L review and see each and every feature in detail. As far as the design is concerned, Xperia L is a lightweight Android mobile phone that is neither too small nor too big. With scratch-resistant glass on the top, the handset comes with a 4.3inch TFT capacitive display with a resolution of 480×854 pixels and supports multi-touch up to four fingers. The superior quality of screen makes the display brighter and crisp.

Sony Xperia L is powered by a 1GHz Qualcomm MSM8230 Snapdragon dual-core processor that enhances the speed making the device work faster. It also consists of Adreno 302 GPU to enhance the display quality.
The device also features 1GB of RAM and 8GB of internal storage. This can be further expanded to 32GB via microSD card.

Sony Xperia L smartphone has the latest Android v4.1 Jelly Bean OS installed in it. Since, Jelly Bean is the latest variant of an Android OS, it has a crisp, sharp display and user-friendly interface offering a sort of new things like: keyboard with gesture typing, new clock app, beautiful themes, wireless display, notification power controls, improved lock screen with modern icons and widget support, high-powered apps and much more.

Xperia L has a 8MP rear camera with LED flash and autofocus feature for capturing high quality images of 3264 x 2448 pixels. The camera also offers some great features like touch focus, image stabilization, geo-tagging, sweep panorama, face and smile detection, HDR, etc. It also has a Video recording feature that is capable of recording video in HD quality. There are some other video features as well like – HDR video, video stabilization, etc. Not only this, the phone also has a VGA front facing camera for video calls.

The phone comes with a standard Li-Ion 1750 mAh battery that is powerful enough to last throughout the day. Hence, Xperia L is one of the best smartphones available in market.

Xperia L is a new mid-range phone in the Sony Xperia series. Sony Xperia L price is around 19,990. However, you can get it online at Rs.18,990 after a 5% discount from Naaptol.

This is a guest post by Alisha Singh. She works with naaptol.com