The company has already launched Angry Birds Star Wars on just about every platform but BlackBerry — iOS, Android, Windows Phone, Kindle Fire, Mac, PC, and Windows 8 are all covered.

Angry Birds Star Wars for Facebook is looking to spread the love even further, with the hopes that some of Rovio’s troves of users will compete against each other directly through their Facebook connections. Gameplay remains the same as the mobile app, but social has been totally rethought within the game.

It works much like Angry Birds Friends, the first title Rovio ever released on the social network. Users can send in-game gifts, check out their spot on the leaderboards, and post about scores and such on friends’ timelines.

The Facebook app will offer weekly tournaments, giving users five new levels every week. Unlike the mobile app, you can never fully beat the game.

Bird-flingers also have a few new power-ups to take advantage of on the social platform, including the ability to duplicate any bird of their choice to get out of a tough spot. Rovio has additionally added a Blaster Droid (for laser destruction), Lightsaber Sling (for high-powered flinging), and a Thermal Detonator (which explodes on command).

Instagram's New Terms Of Service - What Does It Mean To You? 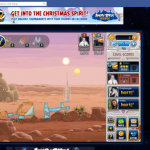