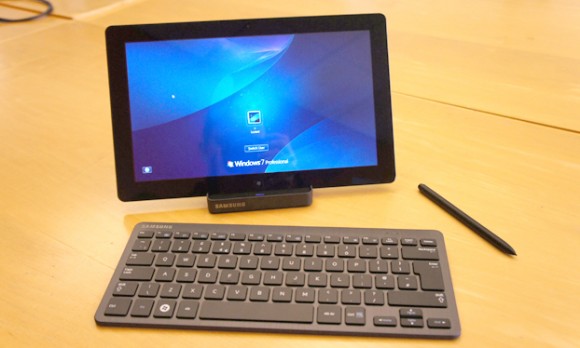 Samsung already showed off its Series 5 Hybrid back at Computex, but what we didn’t know was that Sammy had yet another tablet / laptop mash-up in the works. The company just formally announced the Series 5 and it turns out it’s going to be joined by the next-gen Series 7 Slate as well. (Also known as the ATIV tabs in regions outside the US.) The two 11-inch tablets more or less look alike, except the Series 5 is powered by an Atom-based Clover Trail processor, while the Series 7 packs Core i5 guts. Both support pen input, and will come with the same S Pen apps found on the Galaxy Note 10.1. As for that optional keyboard dock, Samsung previously touted its magnetic hinge, but the dock has since been retooled with a sturdier latch-based mechanism. As you can imagine, that difference in processor entails more than just different clock speeds. The two-watt Atom chip inside the Series 5 is rated for about nine hours of battery life, whereas the Core i5-powered Series 7 is expected to last between four and five hours on a charge. (The Series 5 is lighter, too, at 1.65 pounds, compared with 1.89 for the Series 7.) And, being a lower-powered device, the Series 5 has no vents. Last major difference: the Series 7 has a 1080p screen, while the Series 5’s resolution tops out at 1,366 x 768.

On the software side, Samsung is loading all of its Win 8 systems with its various Media Hubs — yes, just like the ones you’ll find on the company’s Android devices. You’ll also find AllShare, a DLNA media-sharing app; S-Launcher, a widget that replicates the missing Start Menu in Windows 8; and eSettings, a centralized options menu for folks who maybe haven’t learned where all the settings are in Win 8. As for those S Pen applications, you’ve got S Note, among other carry-overs from the Android side. As with the Note 10.1, the pen itself can recognize 1,024 degrees of pressure sensitivity.

Both tablets will arrive October 26th, the day Windows 8 starts shipping. The Series 7 will be available in one $1,119 configuration with 4GB of RAM, a 128GB SSD and the keyboard. The Series 5, meanwhile, will cost $649, and will include 2GB of RAM and a 64GB solid-state drive. If you like, you can purchase the keyboard for $100, or you can buy the two as a bundle for $749. We’ll be back with reviews in October but until then, check out our walk-through below.