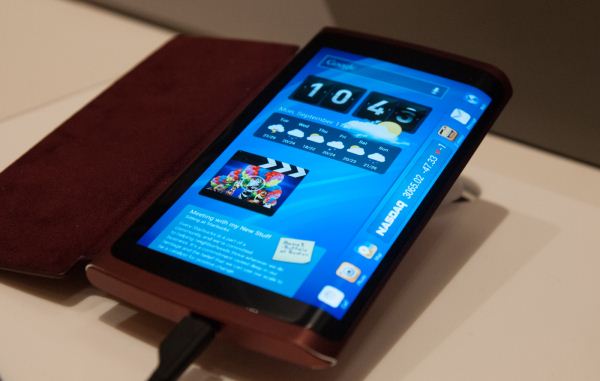 Well, one of the interesting this at CES 2013 was Samsung’s curved smartphone concept. It is definitely something which we might see in future and Samsung demoed a prototype at the CES 2013 show.

The benefit of curved displays? Well, supposedly these new bent panels are capable of lighting up certain sections of the display more than others, so it could help preserve battery life by emphasizing parts of the screen more pertinent than others. It is also expected to be unbreakable!

It houses a 4.99-inch 1080p Full HD screen running at a luscious 440ppi, which is likely to find its way into Samsung’s next Android flagship. The company claims the newer panels use 25-percent less juice than before, thanks to a switch-up in materials, while a low-power mode cuts the battery drain by almost half.

Samsung’s mock-ups weren’t flexible in the sense of being bendable by the user, but instead wrapped the panel around the edges of the device; since AMOLEDs can selectively turn on sections of the display while leaving other parts shut off, that could mean the side of your phone might perpetually show a status ticker – with new message alerts, battery and signal indicators, IM previews, music playlist details, or other information – while consuming minimal power like the one below. We really don’t know when you can actually hold a device like this in your hands which you bought off a store that is but we are definitely expecting some developments to happen within the next couple of months. We’ll keep you posted.