As bizarre as it may sound, a smartphone app that analyses urine samples for a range of medical conditions has been demonstrated at a science fair in the US.

The app can be used as an indicator of 25 different health issues including diabetes, urinary tract infections, cancers and liver problems. The app is called uCheck and was unveiled for the first time at TED 2013 in California. It uses your phone’s camera and urine dipsticks to help you understand, track and take ownership of your health in more interesting and powerful ways.

The app can indicate any medical concerns by examining the presence of glucose, proteins, nitrates and other substances in the urine.

‘Everybody pees, and everybody carries a cellphone,’ said Myshkin Ingawale, the co-founder of med tech company Biosense Technologies. Ingawale tested the the app live on stage at the TED conference in California where it was unveiled, asking an audience member to supply urine.

The app is developed by an Indian company called Biosense Technologies, which received acclaim for creating ToucHb, a ‘bloodless’ blood test for anemia that costs 20 cents a shot.

Here is the video from the TED event: 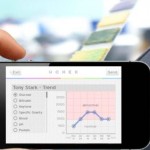