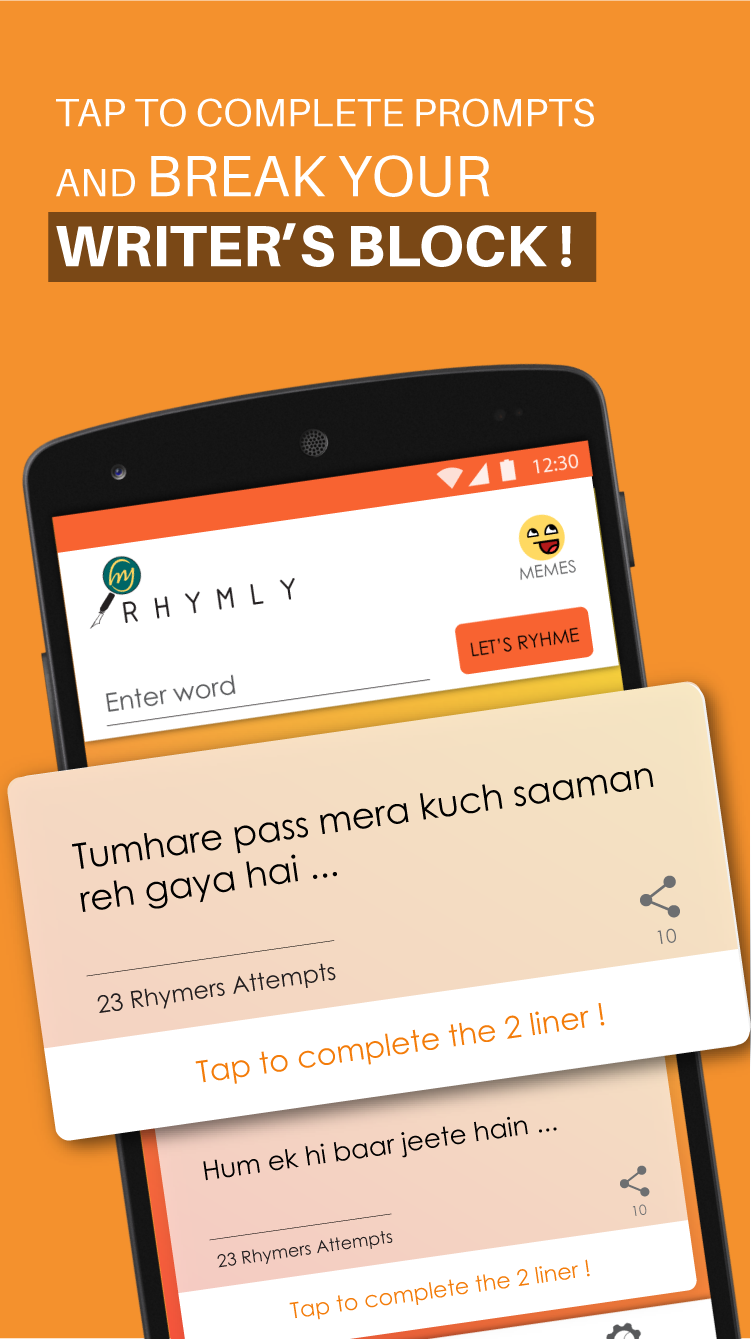 Are you looking for the perfect Hindi words to sweep someone special off their feet but just can’t find the right words? Or do you just have to submit that ad jingle but find yourself stuck in a writer’s block on the first line? Rhymly is here to the rescue. This one-stop content tech platform helps budding creative writers search rhymes and meanings of Hindi words, create original couplets, and share content with like-minded people. The app helps poets, shayars, songwriters, rappers, and jingle writers save time on their art pieces and break their writer’s block.

So, if you ever left behind a dream of becoming a shayar, Rhymly covers the process of short content rhyming, writing, storing, sharing, and discovering on a single platform. Rhymly co-founder and CEO Arpan Khosla spoke to The Tech Panda about his journey towards being an entrepreneur.

Khosla is an engineer and an NSIT graduate, who calls himself a ‘pomedian’, poet + comedian and as such performs a lot of poetry and comedy shows in Delhi and Bombay. The 25 year-old CEO, who has been writing for more than a decade, says that as a writer, he understands the pains a writer faces.

“Searching for the right words is often a pain point for writers like me. Although there are some apps or products that help you share your work, eventually, there are not a lot of apps, products, or websites that help you write better,” he says.

Writing jobs require quality content, for which time is not always on the writer’s side. Khosla realized that India had no app curated for Indians. Hindi being the most spoken language in India, Khosla and his team saw a huge void there.

“So we thought that why not have an app that helps you find rhymes of all Hindi words,” he says.

Khosla knew that while writing in Hind or Urdu, when writers are in need of a suitable word or meaning, the only answer was Google Translate, which was hardly helpful.

“I saw the need for a digital source that could act as a writer’s personal digital assistant, help find rhymes of Hindi words, and side by side, give meanings of those words with transliterations and more usages as well,” he explains.

With this basic idea incorporated, Khosla and his team launched their website, which initially acted more as a search engine utility website for the poetry market. Apart from Khosla, the Rhymly team comprises of CTO, Vishal Kalra and Head of Design, Aakansha Aggarwal, and they all believe in A.B.C.R. (AnyBody Can Rhyme).

Khosla, who visits a lot of poetry, comedy, and music events, was aware of a sizeable target audience, so before making the product, the Rhymly team physically discussed the idea with a lot of people. They put in a good amount of pre-launch marketing for the product and got a lot of personal feedback before launching the website in Dec 2017 for a beta-testing phase of around three months.

To use Rhymly, all a user has to do is type a Hindi word in English script on the website, and the website generates thirty, forty, and sometimes fifty rhymes for the word. Rhymly is being used by poets, rap artists, song writers, and ad copywriters, for lyrics, catchy headlines, and jingles. The tool makes everyday sentences catchy by providing rhymes and meanings.

Khosla’s message to writers out there is, “As a writer, you may know a lot of words but that might not help in the current state of the writing world, so leave the vocabulary part to us, and concentrate on creativity.”

While Rhymly started out as just a website, side by side, they started a sentence prompt activity in social media. They would prompt a line every day, to which users had to provide a second line to make a couplet. This activity generated interest not just among writers but also non-writers with a creative bent of mind. Users started pouring in in the social media part of the Rhymly website.

Khosla says that’s when they started calling themselves a one-stop-content-text starter and not just a standalone utility website. The social media angle of the app enabled people to connect with each other while rhyming, hence bringing together content creation and content sharing.

The app is available for download here , after which, a user can log in via Google or Facebook. The app contains three activity pages, the feed, the prompt page, and the profile section. The feed displays all the couplets by featured writers, i.e. the best-written pieces that are submitted after being moderated and selected by the team.

The prompt page suggests single liners to users, which they can complete into couplets. In the profile section, a user can view their submissions and featured work. The app also has a funny meme section and to like a page a user can press the ‘Wah wah’ button. By the end of the month, a user can generate his or her own social following.

As a creative person, Khosla says starting a business did pose a few challenges for him.

“Poetry is an adventure that has been going on for a lot of years. An artist has a deep emotional connection with things. I started Rhymly as more of an initiative. We never eyed ourselves as a startup initially. It turned out to be one because of the response that we got and the kind of people who connected with us.”

To up his game, Khosla says he reads a lot of entrepreneurial articles every day. “For me, doing something on my own comes naturally, so the transition from an artist to an entrepreneur was smooth.”

Currently, Rhymly caters to Hindi, Hindustani, and Urdu. Hindustani refers to the language that draws from both Hindi and Urdu. However, Rhymly has plans to cover other languages such as Punjabi and English as well. Foreign languages are also in the pipeline. “Five-six months down the line, we see ourselves getting into the whole Indian geographical market and then moving towards the foreign market. We have created a very good algorithm; I think it is pretty scalable for other languages as well,” he says.

The Rhymly website started with 10,000 odd unique users. After the launch of the app last month, the user base is at 12,000 downloads. Rhymly also collaborates regularly with local tech content platforms to reach out to more users.

“The Indian market has a lot of content distribution apps, which help you share your content, so we have been actively co-sponsoring a lot of events,” Khosla explains. “We are also actively collaborating with startups for open-mike events, where new artists come and try their luck in poetry, comedy, or music,” he adds.

Team Rhymly is also in touch with a lot of news media websites and plans to eventually add an events page, where all the events happening in the city or India at the moment will be listed. As such, Rhymly is reaching out to a lot of local startups, companies, and organizations that organize such events. Apart from the local market, Rhymly is also reaching out to companies catering to the Indian plus foreign markets.

“Because I have been performing for a long time, and my whole team has been there, we have a lot of contacts with startups that allow people to perform, and that provides us a huge scope for collaboration,” he says.