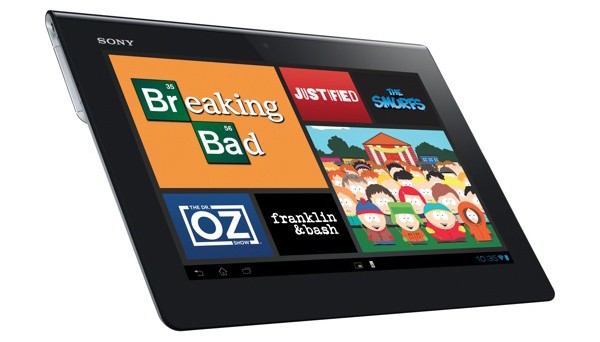 Looks like those leaked slides showing Sony’s Xperia-branded tablet were right about pretty much everything. (Well, everything except the price, anyway). The company just formally announced the Xperia Tablet S and, as rumored, it features a Tegra 3 chip, Android 4.0 and up to 64GB of built-in storage. Like last year’s Tablet S, it has that distinctive folded-over magazine shape, except this go-round it’s made of metal, and measures between .35 and .47 inches thick (the weight, too, has dropped to 1.26 pounds, down from 1.31). Sony also kept the Tablet S’ IR emitter, which allows the tablet to double as a universal remote, and this time you can program shortcuts to do things like watch sports. Rounding out the spec sheet, there’s a full-size SD slot, a 9.4-inch (1,280 x 800) IPS screen and a 6,000mAh battery promising 10 hours of runtime. As we mentioned, the tablet will ship with Ice Cream Sandwich, but Sony is promising an upgrade to Jelly Bean as soon as it can optimize all its custom apps. And indeed, there are quite a few specialized applications here. For starters, there’s a new Watch Now app that allows for live TV-viewing (cable subscription required), with the option to “check into” shows and share comments on Facebook and Twitter. Meanwhile, Sony added a Guest Mode that lets you create custom user profiles, forbidding the use of certain apps — a handy parental control tool, we say. Naturally, Sony also threw in Music and Video Unlimited, where you can buy content from Sony’s vast movie and song catalogs. Finally, the tablet comes with 5GB of space in PlayMemories, Sony’s new cloud storage service.

The tablet will be available September 7th, though Sony is accepting pre-orders starting today. It will start at $400 for the 16GB model, with the 32GB going for $500 and the 64GB for $600. And yes, as those leaked slides indicated, there will most certainly be accessories. For starters, there’s that optional Surface-like keyboard we heard about, priced at $100. There’s also a three-position stand, with HDMI output and a USB adapter for a charging. That, too, costs $100. Sony is also selling a charging cradle ($40), a plain-Jane stand ($25), a dock speaker ($130) and a carrying case, priced at either $51 or $80, depending on whether or not you get it in leather. We very much expect to get some hands-on time at IFA, so stay tuned for first-hand impressions.