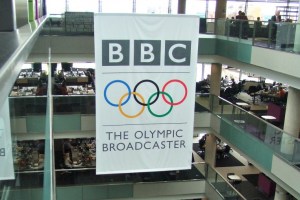 Streaming the Olympics: How the BBC and Adobe do it

Adobe announced Wednesday night that it is going to power the BBC’s live streaming of the London Olympic Games, which are scheduled to start Friday with the opening ceremonies. The BBC has relied on support from Adobe in the past, but this is the first time it is officially using parts of Adobe’s Project Primetime, which represents the company’s next big bet in the video space. And it’s not all about Flash.

In fact, at the center of the BBC’s offerings is a new HTML5 app that has been built with Adobe’s PhoneGap, an open source HTML5 development framework the company acquired as part of its Nitobi Software buy late last year. The BBC used PhoneGap to build apps specific to the Games across tablets and mobile phones. Adobe will also deliver streams to connected TVs. Here’s how this will look on the ground: The BBC is providing Adobe will broadcast-quality MPEG-2 feeds of the games, which the company will repackage on the fly for different devices and use cases. Adobe will use both its own HTTP Dynamic streaming (HDS) as well as Apple’s HTTP Live Streaming. For the BBC, this means that it can provide adaptive streaming for a variety of devices, with bit rates automatically adapting to bandwidth constraints without the need for a video stream to restart and rebuffer.

The BBC will offer a total of 24 live streams from the London Games through a new interactive video player, which will allow viewers to switch between events, pause, rewind and more. And the BBC’s existing iPlayer will be used to stream live coverage of the BBC’s 3 network channels. The 24 online channels alone will provide some 2,500 hours of live coverage of the events.

So how does Project Primetime factor into all of this, and what is it all about to begin with? Primetime is essentially Adobe’s very own video platform, and its attempt to compete with industry players like Brightcove and Ooyala. It’s squarely aimed at large-scale broadcast scenarios, and combines publishing, advertising and analytics components, with the ability to use a whole bunch of existing Adobe projects in the process.

The company announced Primetime in February, and will roll the product out in earnest later this year. However, it has been testing parts of Primetime with select broadcast partners for months, and the Olympics represent another of those tests. Being a publicly funded broadcaster, the BBC has no need for Primetime’s advertising component. Instead, it’s relying on Adobe for the actual publishing, and is also using the real-time ingestion and editing capabilities to create clips of highlights on the fly.

The bigger vision of Project Primetime is to use Adobe’s technology to help broadcasters serve videos on any device, be it through native apps, Adobe Air apps, HTML5 or evolving connected TV frameworks. The big challenge these days is for publishers that they have to target so many different platforms, Adobe’s director of product management, Video Solutions, Ashley Still told me last week. “In a lot of ways, it’s a mess,” she said. But of course, for Adobe, it’s also a big opportunity, especially as the company is moving beyond Flash. “We are trying to provide a shared video stack for all these services,” said Still.