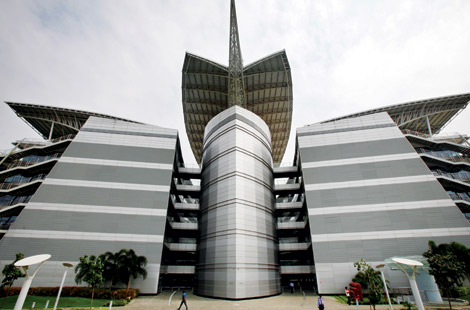 Tata Consultancy Services (TCS) reached the $100 billion mark for the first time, making it the first company in this decade to cross this milestone, and the second ever in India. The value adds up to 680,912 crore in Indian rupees.

India has been waiting a decade for one of its companies to join the 100-billion-dollar club after billionaire Mukesh Ambani’s Reliance Industries crossed it in 2007, though now it stands at $89 billion. Currently, only 63 other companies exist with a similar market cap in the world. Facebook, Amazon, Apple, IBM, Microsoft, Google’s Alphabet, Alibaba, to name a few. With the current feat, TCS has overtaken Goldman Sachs.

“We are…delighted and thankful to our employees and customers who have been instrumental in achieving this milestone,” CNN Money quoted TCS CEO Rajesh Gopinathan.

On the 23rd of this month, TCS shares jumped 4%, bringing up the tech giant’s value to $100 billion. TCS stock prices rose after the company announced its quarterly revenues of almost $5 billion, a figure contrary to expectations foreseen by analysts.

The October-December net profit for TCS has risen by 5.7% leading to a revenue of INR 32,075 crore. Also, the company declared a 1:1 bonus share issue, stimulating sentiments of investors. Moreover, TCS shares have risen by a 25% since January in comparison with Infosys’ 14%.

According to CNN Money, Gopinathan said its positive performance was due to the company’s advancement in new digital technologies like cloud computing, automation and smart, connected devices. He also cited TCS’ last year deals with strong clients like Marks & Spencer (MAKSY) and Rolls Royce (RYCEY).

According to Money Control, the current market cap of TCS is more than the GDP of at least a hundred and twenty countries, including Ecuador, Slovakia, Kenya, Costa Rica, Belarus, Bulgaria, Sri Lanka, Luxembourg! This feat also puts TCS at two and half times more market cap than rival Infosys, which as of April 20 was INR 2.57 lakh crore, followed by Wipro at INR 1.35 lakh crore.

TCS, along with Infosys and Wipro, forms the elite group of tech companies that are responsible for India’s image as an IT domain.

According to experts, one of the reasons for the better performance of TCS is owed to its operations being done on a larger scale than Infosys. Considering the challenges caused by the Trump Administration’s protectionist trade practices to India’s IT sector, TCS has adapted well. 70% of the American H-1B visas generally go to Indian IT personnel, but this number is now in check because of restrictions put by the US government.

However, prior to the US government’s H-1B restrictions, TCS has been steadily cutting down its requirements from the visa program by increasing local hires instead. According to TCS’ latest annual report, in the last financial year, the company has taken on 11,500 new hires outside India. In addition, the company has been taking care of expansion outside of North America, namely Europe and UK.

Another reason cited by analysts is the steadiness that TCS has shown while changing leadership. While N. Chandrasekaran was the head of TCS for seven years, Infosys saw a change in leadership thrice, Senapathy Gopalakrishnan (2007-2011), Shibulal (2011-2014), and Vishal Sikka (2014-2017). Moreover, while Chandrasekaran’s exit was a smooth promotion to Tata Sons, Shibulal’s departure from Infosys was because of non-performance and Sikka’s exit was attributed to disagreements with co-founders. TCS on the other hand, from the year it was founded in1969, has only seen four CEOs in total.

According to Business Today, veteran industry analyst, Sudin Apte said, “Both the companies TCS and Infosys have seen leadership changes but the results show that TCS is a little bit ahead of the curve and has not seen the kind of disruptions that Infosys has seen over the last few years. TCS has been able to stay focused in terms of strategy and identify its niche with the clients.”

For a company that has four lakh employees representing 131 nationalities across 46 different countries, TCS is India’s largest private sector employer. It does have problems like rising costs of hiring. Still, the position of TCS in the IT market is such that it offers a full spectrum of services from core-tech transformation to front-end digital technologies. Moreover, its culture is known to be a basis for many successful firms in India and in the Silicon Valley. With 35.3% of women employees, TCS is also trying to bridge the gender gap in IT companies.

VarIndia quoted Phil Fersht CEO of IT research firm HfS, “TCS has stayed very focused on relentless execution and less obsessed with marketing messages and trying to sound like everyone else the phone has created its own individual identity which many of the other service providers are still struggling to do. I sometimes call TCS the ‘Indian IBM’ because of the longevity of its staff and its unique culture”.

Also, as part of the Tata Group, TCS has shown success, accounting for around 85% of the group’s profit, leading to the Tata Group to enter the INR 10 trillion market capitalization league.