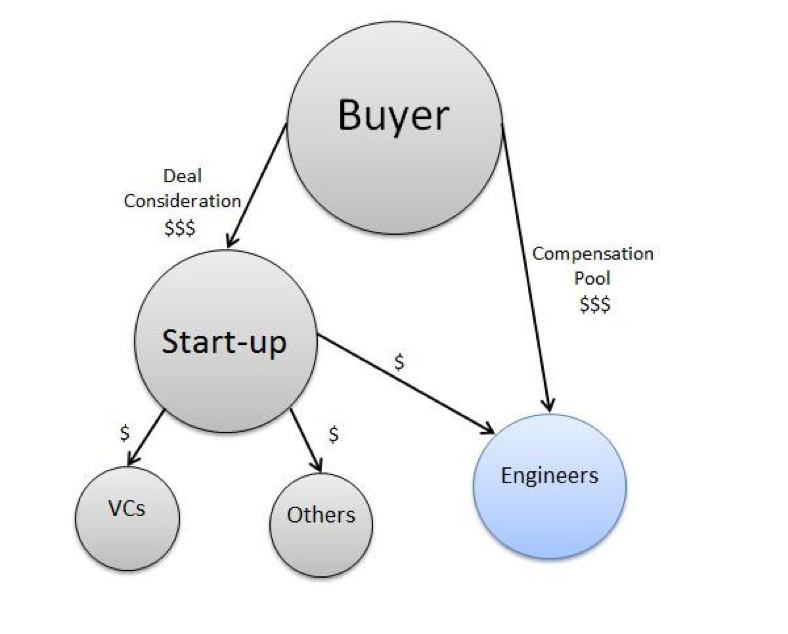 The Vanity of the “Acqhire”: Why Do a Deal That Makes No Sense?

“Acqhires” — where larger tech companies make deals to absorb young companies for their talent rather than their product – are a bizarre and unique part of the Silicon Valley economy.

When it really comes down to it, they are about ego and saving face, according to what may be the first academic study of the matter by two University of North Carolina corporate law professors.

Fortune’s Dan Primack posted on the study – which at times sounds more like psychology than law — and spoke with one of the authors.

However you spell the awkwardly named phenomenon (the study’s authors use “acqui-hire”), it is an odd one, specific to both the spirit and legal considerations of companies based in Silicon Valley.

Authors John Coyle and Gregg Polsky posit that acqhires make little sense. Why doesn’t Google, Facebook or Zynga just hire away a team of engineers, if that’s what they’re after? Generally speaking, California employment laws allow this, and it would cost less and put money directly in the hands of the newly hired employees.

But there’s a third party involved: The start-up investors. While VCs don’t get much money back when a portfolio company is acqhired, they aren’t totally screwed. And even though VCs are extremely unlikely to sue — the authors could find not a single example — both large tech companies and engineers are scared of making VC enemies.

So basically, it’s a self-regulating environment, because people care about long-term relationships and reputations more than a single transaction.

And what’s more, structuring a hire as something closer to an acquisition makes it sound like a success.

It’s cheap and sexy to build a start-up and relatively easy to find seed money, so many great hires are locked up outside of larger, more successful companies. This is where ego comes in. Being able to say your start-up “sold” is more prestigious than just quitting your job to join the same company. Plus, it’s possible that you’ll be taxed much less, if the compensation counts as long-term gains.

Coyle and Spolsky drew from interviews with 17 entrepreneurs, venture capitalists, buyer representatives and lawyers involved with acqhires. Some quotes:

Certainly an acqui-hire is a more positive story than the one that would accompany a defection. As one investor put it: “[I]t’s a lot cooler to say you ‘sold’ your company even if everyone lost money than to say your company was an utter failure and you put it into liquidation proceedings and grabbed a nice offer from Google.” Or as another interviewee explained, “The talent wants the mystique of having been ‘bought out.’” Or as still another interviewee observed: “Some of these ‘acqui-hires’ are cosmetic things. It’s not really much of an acquisition at all but just an assuming of employees with some modest signing bonuses and retention payments. Then you add all of this stuff up and send out a press release that says you were acquired for $8 million when in reality that’s the value of the stock those employees would have gotten anyway for joining.”

Here are the common elements of an acqhire, per Coyle and Polsky:

Here’s the full study, via Fortune: