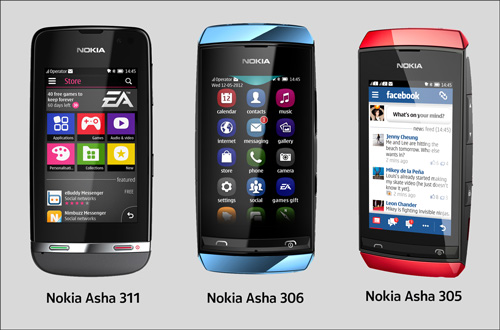 Nokia Asha series has been successful by all measures. Some would even say that, Asha series is the only thing that’s holding the Finnish company together, at a time when it is struggling with Windows phones. Asha series has a varying range of phones at offering– from powerful touchscreen phones to flashy QWERTY handsets. Here is a list of the five best Asha phones Asha 311 is one of the best touchscreen phones in the Asha series. It sports a 3-inch capacitive display. The display is low res, but it has polarization filters (like laptop displays) which reduce glare, giving a better visual experience. Though it is not a smartphone, it is powered by a 1 GHz processor. When you couple that with the refreshed Series 40 UI, you get a phone which delivers a very fluid performance. In terms of connectivity, it has Wi-Fi and 3.5G capabilities along with the obligatory Bluetooth. It comes with a 3.2 MP rear camera and is pre-loaded with Nokia Maps, the popular games like Angry Birds and many other useful apps like WhatsApp etc. It has an impressive 14 hour 2G talk time with 1110 mAh battery. Priced at around Rs 6000, the phone is an affordable substitute for smartphone. It is best for those, who for some reason don’t want to complicate their lives with an Android or an iPhone. Similar to Asha 311 in terms of processing power and S40 platform, Asha 302 comes with a 2.4 inch screen, with a resolution of 320-by-240. It has a QWERTY keypad for input. The phone has a classy look to it, complimented with the chrome elements. It comes with a 3.2 MP camera, which can capture quality pictures and video at 15 fps. In terms of connectivity, it comes with Wi-Fi and 3G capabilities and common features such as Bluetooth and USB. It has 128 MB RAM, and 100 MB of internal memory which can be expanded by up to 32 GB with micro SD cards. For around Rs 6500, Asha 302 appears to be a standard S40 phone, but its QWERTY input and hardware work in concert to make the phone one of the best in the Asha series. Asha 305 is a dual SIM touchscreen phone. It comes with a 3-inch, 240-by-320 TFT display, with resistive input. It’s a budget phone, but with Android phones very near to the price and offering way more features, there were concerns that Asha 305 may be a couple of years late. But, the phone throws some surprises with refreshed smartphone-like Series 40 interface and a fluid performance. The touch response is a little slower because of resistive input, but that doesn’t affect the performance too much. It comes with a mere 64 MB internal memory, but is expandable up to 32 GB. It has an average 2 MP camera, with video recording capacity of 10 fps. With Nokia Asha 305 price at Rs 4500, the phone is a well-crafted and contains loads of features. It has a very high feature-to-price ratio. It makes certain compromises, but comes up just right for the budget-savvy consumers. Priced at around Rs 3,600, Nokia Asha 201 is a low-budget dual SIM phone. It comes with a 2.4 inch LCD display and a spacious QWERTY keyboard for input. The phone has a very vibrant look and is available at explosive colors like light green, deep blue etc. It comes with 10 MB internal memory, expandable up to 32 GB with micro SD cards. It has a 2 MP sensor with video recording capabilities. The S40 operating system doesn’t have a very different UI from past S40 phones, but manages to deliver a refreshed experience. As of connectivity, it doesn’t provide the HSDPA support, but the EDGE isn’t very slow either. Powered by a 1430 mAh battery, it can easily pull you through a heavy day of chatting and music playback. Asha 201 is clearly designed for teens and young adults and is a great buy for anyone who wants to have a phone just for fun. Asha 308 is a beautifully designed feature phone. It has a 3-inch WQVGA capacitive touch display with a glossy finish and protected by scratch resistance glass. The Asha S40 OS gives a very intuitive and intelligent interface which amounts to a great experience with the phone. It comes with an average 2 MP camera, which is decent for daylight shooting. At the first glance, the phone really feels like a smartphone– a rich collection of apps and games, threaded-view for messages etc. but you can’t really multitask with the phone. Then there’s no 3G/LTE support, which is not very surprising if you look at the price tag. All in all, the phone is a rewind in of mobile technology. That shouldn’t take away the fact that it has capabilities way beyond the current feature phones and at around Rs 5500, is probably the best choice for those who are looking for a phone for basic purposes like messaging, music and casual browsing.

All phones in the Asha series are undoubtedly the best feature phones available in the market. The crux of launching the series had been to deliver a fully fleshed package of features for an affordable price. All the phones make compromises to stay at the price they are available. If you are looking for a feature phone, it’s only a matter of time till you find an Asha phone which delivers the perfect package for you.