A team of researchers at the University of Southern California have developed a data transmission technology capable of moving the equivalent of 70 DVDs in one second. Led by Alan Willner, an electrical engineering professor at USC, the team was able to improve upon existing twisted light technology to achieve throughput speeds of 2.56 terabits per second over a distance of approximately five feet.

“We didn’t invent the twisting of light, but we took the concept and ramped it up to a terabit-per-second,” Willner told The Bunsen Burner. “You’re able to do things with light that you can’t do with electricity. That’s the beauty of light; it’s a bunch of photons that can be manipulated in many different ways at very high speed.”

Willner said that his team’s implementation of the technology involves manipulating “phase holograms” to twist eight beams of light into a DNA-like helix. The resulting hologram is then able to carry data bits — zeroes and ones — independently on each beam at an extremely rapid rate.

According to researchers, the technology has potential applications in high-speed satellite communications, short terrestrial links or even in long-range fiber optic cables such as the ones used by Verizon’s FiOS service or Cablevision’s Optimum Lightpath.

How To Completely Digitize Your Finances [Infographic] 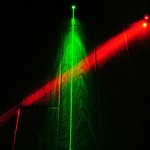