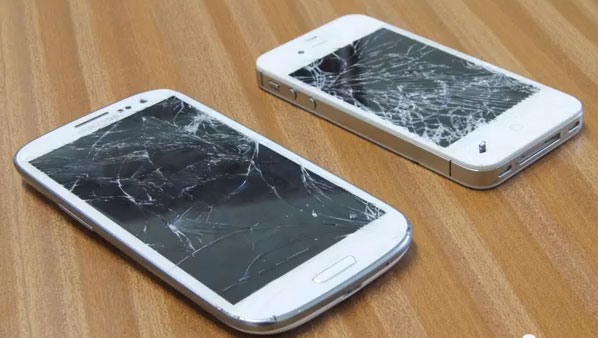 It happens many a times that we accidentally drop our phone while talking. I am sure those who have small kids at home have even more interesting death stories about their phones. What we will see today is how well are the Samsung Galaxy S III and the iPhone 4S when subjected to certain drop tests.

SquareTrade, an independent warranty provider, subjected Samsung’s hot new Android phone to a drop test. For comparison, it also dropped another hot phone with which you may be familiar: the iPhone 4S.

It’s actually a three-part test. First, SquareTrade dropped the phone from ear level — certainly a fair test since a drop while making a call is probably the worst case scenario because of the phone’s height above the ground. Next, they gave both phones to two small (and super-cute) kids, simulating what a toddler might do to a parent’s phone. (SquareTrade says one in four parents have had their kids damage their phone in some way.)

Finally it was time for the car test, letting both phones slip off the back trunk of a moving vehicle as it pulls away. One in 15 people have damaged their phones “in and around” their cars, according to the company.

It is a close contest with both devices taking some damage. Check the video to find out who wins.

Do leave your comments below and also share if you have had a story about your phone being murdered by your kid, or in fact, by you!