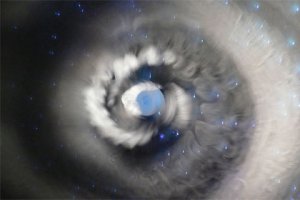 What Does the Discovery of the God Particle Mean? [VIDEO]

So what is this Higgs Boson or God Particle thing all about again?

The NASA-approved cartoon above tries to explain. Created by PHD Comics, the video features two scientists giving an overview of the so-called “God particle” as an illustrator attempts to visualize the concepts.

The gist is that there are untold numbers of particles, but scientists only know of 12. With the CERN supercollider, scientists can annihilate particles and then reconstruct them in a new way to see what’s going on at that subatomic level. Using CERN’s $10 billion Large Hadron Collider, scientists either were or weren’t able to find Higgs boson, a particle predicted by the Standard Model that gives other particles mass.

What is “the Higgs,” and how does it give other particles mass? The scientists urge you to view mass not the way we typically think of it but as a “characteristic” similar to a charge that particles either have or they don’t. Next, the scientists ask you to envision the universe as a field (the Higgs field) in which particles are affected in various degrees by the amount of mass they have. A confirmation of the Higgs’ existence would support the Standard Model, a sort of user’s manual for modern-day physics.

The difference between both is tiny (it’s represented by a little budge on a graph) so lots of data is needed. The LHC performs 40 million particle collisions a second all day, all year, netting a huge amount of information. However, there are 10 other ways to see “the Higgs” and scientists are pursuing those as well. On Wednesday, the scientists will let the world know if any of the methods worked.

Still confused? You’re not the only one, but after watching the cartoon, you may be able to at least sound like you know what you’re talking about.