Windows Phone Will Only Capture 4% of the U.S. Smartphone Market in 2012

Nokia and Microsoft went all-out with the Lumia 900 when it launched earlier this year. For weeks it seemed impossible to go even one day without seeing a Lumia 900 commercial or a print advertisement, andearly sales of the sleek smartphone looked promising. According to a new study from market research firm Strategy Analytics, however, Windows Phone sales will barely make a dent in the U.S. smartphone market this year. Strategy Analytics sees 123 million smartphones being sold in the U.S. in 2012, and just 4% — or less than 5 million — of them will be Windows Phones. The figure would be an improvement over Microsoft’s 3% share in 2011, but considering the push behind the Lumia 900 and the launch of Windows Phone 8 this fall, sales of fewer than 5 million units would not bode well for the platform.

“Microsoft is making a determined push to crack the United States because it is the most valuable and influential smartphone market in the world. However, Microsoft’s US smartphone market share remains relatively niche at present and breaking the stranglehold of leaders Android and Apple (AAPL) will not be easy,” Strategy Analytics analyst Neil Mawston said.

He continued, “To grow further, we believe future versions of Microsoft’s Windows Phone 8 platform will need to dramatically improve support for advanced technologies like multi-core chipsets, enhance the Marketplace app store, expand the number of phone models available from major partners like Nokia or Samsung, and consider reducing the license fees it charges per unit to smartphone makers.”

How Steve Wozniak Became the Genius Who Invented the Personal Computer 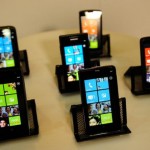 Windows Phone Will Only Capture 4% of the U.S. Smartphone Market in 2012