Apple declared its quarterly report which shows the company’s profit decline for the first time in a decade. CEO Tim Cook was unusually open during Apple’s earnings call about plans for the future.

“We are pleased to report record March quarter revenue thanks to continued strong performance of iPhone and iPad,” said Tim Cook, Apple’s CEO. “Our teams are hard at work on some amazing new hardware, software, and services and we are very excited about the products in our pipeline.”

“Our cash generation remains very strong, with $12.5 billion in cash flow from operations during the quarter and an ending cash balance of $145 billion,” said Peter Oppenheimer, Apple’s CFO.

Here are some interesting numbers from this quarter:

What Are The Chances of Survival of a Startup? [Infographic] 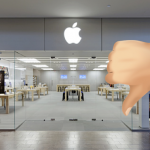