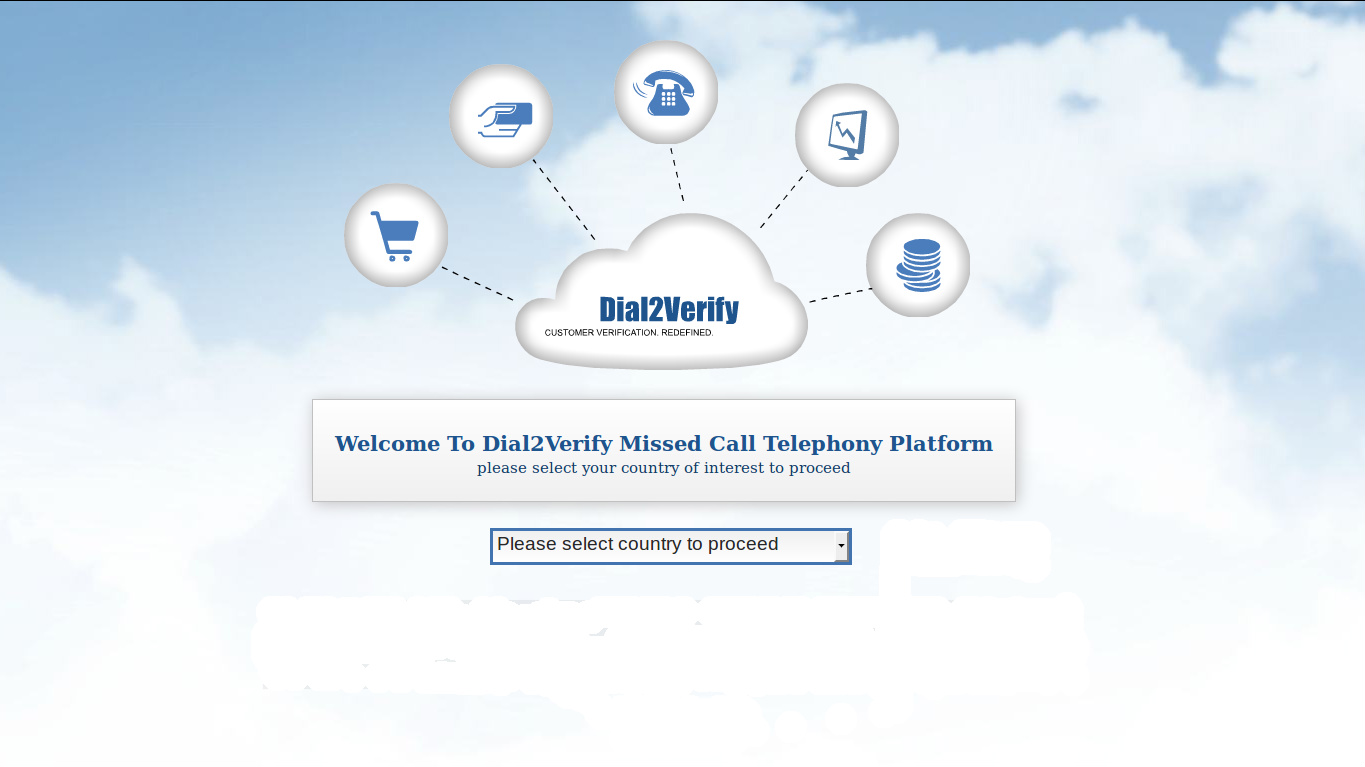 Moving forward with the technology era we have heard of various innovations and did digest it as we understand there was a problem that needed to be addressed.

But have you ever heard of Missed Call Telephony Market, yes it exists and it’s growing faster and is expected to take over the sms verification systems.

Dial2Verify with its creative idea and taking advantage of best in technology is helping over hundred businesses in replacing traditional customer identity verification systems with Dial2Verify’s Missed call implementation.

For many small businesses who use sms services for customer verification, Dial2Verify can be you best alternative solution, not only will it help in saving money by cutting down the expenditure on bulk sms services but also make the process for your customers more smoother and faster.

Dial2verify is A PAAS ( Platform As A Service ) Start-up, Providing missed call based alternative to OTP & Captcha. It helps  websites in building cleaner and trusted user-base for better ROIs.

We had the opportunity to talk to Rahul, Co-Founder & CTO at Dial2Verify and dig more into this innovation.

Can you introduce us to Dial2Verify, the concept? And how exactly does it work?

Dial2Verify is a PAAS ( Platform-As-A-Service ) start-up operated from Mumbai-Bangalore & UK. We provide extremely easy to use, yet very powerful API for implementing missed call based customer identity verification (as an alternative to OTP & Captcha).

We also have developed Plug-N-Play plugin on top of our platform, to integrate Dial2Verify services in 3rd party applications, with just one line of  additional code.

Dial2Verify is India’s FIRST and the ONLY OPEN platform providing customer verification services in Cloud.

Let me explain you how it works, with working blueprint: For Live Examples, Check out the links below:

Tell us something about the technology behind Dial2Verify?

At the core of Dial2verify API Engine, is the hosted telephony and our proprietary software programs. In the recent API, we also added a new proprietary program ‘Automatic Switch Circuit`, which is responsible for keeping Dial2Verify service Up & Running.

What’s the programming language used for coding the APIs?

We have made use of Python for the Core API Engine program & Shell scripts wrapped within PHP for API Interface programming.

Is Dial2Verify useful for marketing & e-commerce firms only or can other kinds of companies benefit from it as well?

Dial2verify is useful to almost every business segment ( and not just specific industry domains ), where there is a need to build cleaner and trusted user-base, validate transactions etc. It’s URL forwarding feature enables developers to replace traditional way of customer interactions with legitimate missed call requests. For instance, Forgot password option can be replaced with a missed call to retrieve password ( Check here live example, http://usage.dial2verify.in ), another use case would be, you can be just a missed call away from your customers (rather than filling traditional contact us forms)

Businesses are using our API for following use-cases:

1. Signup Verification: For Building a clean, trusted & authentic user base by validating their telephone numbers.

3. Transaction Authorization: By using Dial2Veriy as an alternative to OTP based transaction authorization. Thereby significant reduction in the upfront costs.

How has been the response so far? How many firms have you signed up with till now?

Since the launch of our service, we could observe great momentum in its adaption. We launched Dial2Verify in APRIL 2013, and so far 92 Business are registered with us to use Dial2Verify Platform on their applications. (92 is the count as per today’s Ops report)

On an average our system is processing about 700-900 verification requests a day.

Tell us something about the team behind Dial2Verify.

Passed out in 2010, Rahul has worked in an MNC on Business Intelligence & Data-Warehousing for almost 3 years. In Parallel he also continued exploring Startup ecosystem and launched series of small startups, some of which ran well and others had to see the shut door. Rahul is responsible for Dial2Verify API Framework and Technical development stuffs at Dial2Verify Labs.

Passed out in 2011, Manish has worked as a DWH Application Tester for one of the MNC in Bangalore. Fed up with MBA Plans and influence of Koramangla based startups, made him push himself to get into Startup plans. He is a great singer & is responsible for India Operations and Sales.

What are your future plans for Dial2Verify?

Yesterday we pushed a new version of our API ( API v2.5 ) to the production stack, with this Dial2verify platform is further enhanced for mass verification request handling. We now have 2 important activities in pipeline,

1. Expansion to the new geographic markets.

2. Launch of a plug-in market place on top of Dial2Verify Platform.

Considering huge use cases, we are inviting developers to develop 3rd party software integration plug-ins and resell them to web business through our marketplace or via 3rd party market places.