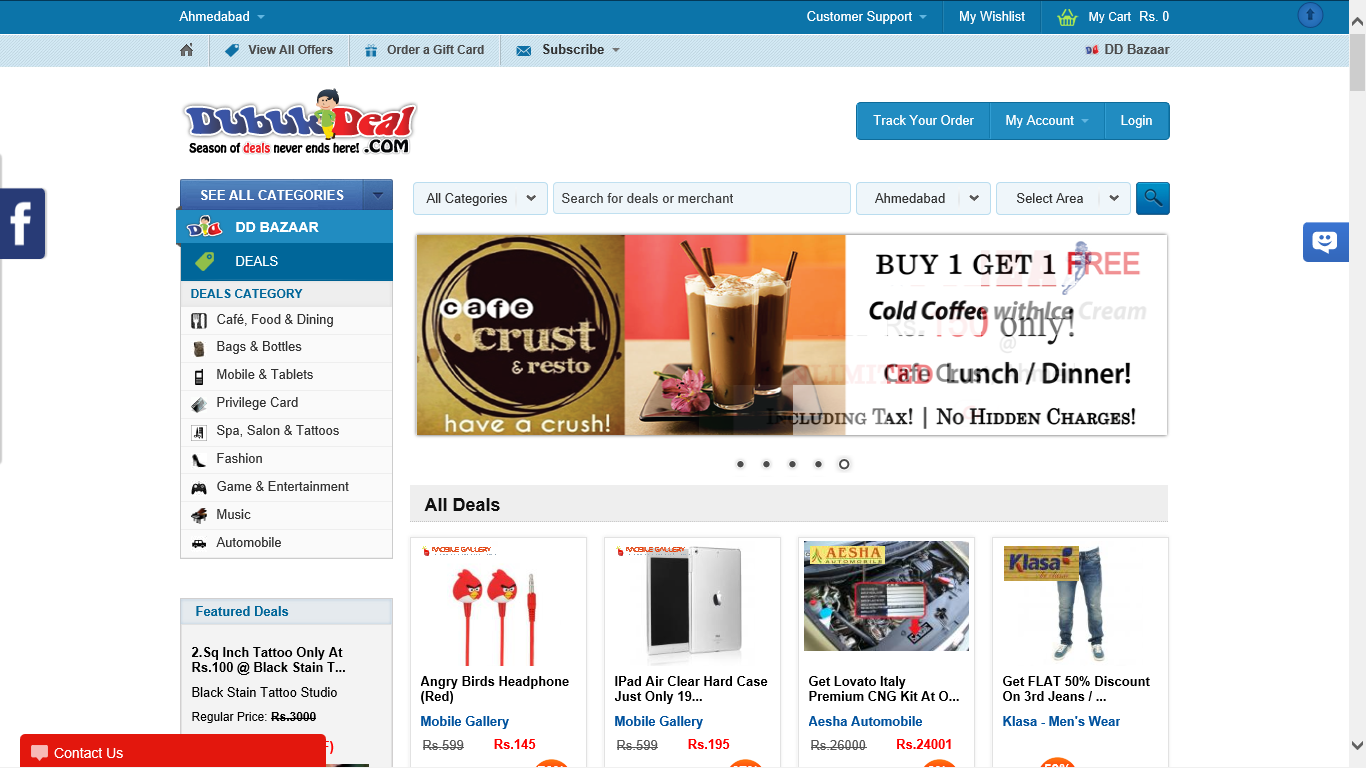 Ahmedabad based Dubukdeal will find you the best Deals in town! DTerms such as discount, offer or sale never fail to excite us. Be it food or shopping, we always tend to choose a place that offers the best deal. Though, the deals we choose are not actually the best ones in town. What we need is a platform that provides all the information regarding offers and discounts. Dubukdeal.com lets us find the best deals in town!

Dubukdeal is an online portal that provides the best local services merchant deals to the customers on Food, Spa, Saloon, Tattoos, Gym, Banquets and many more. As an e-commerce platform, it sells and delivers products such as Mobile phones, Microwaves, Consumer Electronics, Clothing, Footwear,  Books, Kitchen Appliances, Watches, School Bags, and many more at their best prices. Dubukdeal’s mission is to provide customers the best products and deals.

The platform works in 3 easy steps. The first step involves choosing the best deal. The second step is to click on ‘BUY NOW’ and pay using Debit cards, Credit cards, Internet banking or cash cards. Finally, you will receive the purchased voucher via E-mail or SMS. The idea of Dubukdeal was conceived on 13 December 2012. The website went live in May 2013 and has received a good traction so far. The website began with 40+ merchants offering 80+ deals.

Parth Desai is the CEO and founder of Dubukdeal. He has a bachelors degree in B.C.A. and 2 master degrees from Sydney, Australia (Masters of Engineering Management and Masters of Information Systems). In Australia, he worked as an Marketing Executive in a leading Australian Telecommunication company.  Nimesh Patel is COO at Dubukdeal. He has a master degree of Master of Computer Applications. He has worked as a Sales Executive for a London Based firm. Dubukdeal was recently interviewed in a program ‘Business guru’ on Radioobuddy.com, an online radio. An esteemed B-school Xcellon Institute is undertaking a case study on Dubukdeal.com. Marketing and Plans to make money

The Startup was lucky to clinch deals with a few merchants post its launch. Dubukdeal team gives a beautiful pen to each merchant which is engraved with a Dubukdeal logo. The Startup sticks Dubukdeal logos on the merchant’s office gate for the customers to see. It initially used social media and Google Adwords to market itself. Also, promotional messages were sent to the target audience. The Startup managed to attract 15,000+ users on its Facebook page.

As for revenue, Mr. Parth Desai (Founder & CEO) explains, “First, we do not charge to the merchants as we believe that Merchants are already giving their part by providing us an exclusive Deal. It is their investment by not charging in full. Second, we charge small market fees / convenience charge to the users when they purchase any deal. This way, they can save big discounts by paying small market fees. For example, in U.S Pizza, if you go for Unlimited Dinner, then it costs Rs.200 + Taxes while on DubukDeal you can find same Deal in Rs.150 only including Taxes.”

With limited marketing budget, Attracting customers has been the biggest challenge for Dubukdeal. The Startup shall opt for Angel funding in the future. MyDala, Groupon and Timesdeal are a few competitors of Dubukdeal. “There are other startups in the market but we do not consider them a threat or competitor because they are Groupon clone and no way different or innovative. We offer great support and “Livechat” support which turned out to be USP for us as we got feedback from our customers. We are better because we have started our company not to be just a Deal website but also to become a marketplace so we have ready to go infrastructure to selling products via merchants.”, says Mr. Desai.

Dubukdeal is completely Bootstrapped by the founders. Though, the team is looking for some Angel Investments. As for future plans, Mr. Desai explains, ” In near future we would like to add more categories to feature new and really great deals in those categories. We would like to expand in new cities where this Deal business is still not that popular and prove over there. We would like to start featuring products along with Deal vouchers so users can buy directly from DubukDeal and get it delivered.”

The deals mentioned look quite exhaustive and relevant to the local market. It would do a lot of good to dubukdeal.com, if they can  advertise deals based on the customer’s current location.  Content & Deal Curation of this magnitude  is manually very intensive, and the team needs to plan the foray into other cities carefully. We wish Dubukdeal.com team the very best!