Last week, Google posted a message to its online store saying that shipments of the 16GB model were delayed one to two weeks. Now, the store has stopped taking orders altogether.

Those who want to purchase the $249 version of the tablet are told to sign up to be notified by e-mail when it is back in stock.

The 16GB version is also sold out at GameStop, Kmart, Sam’s Club, Office Depot, Staples, B&H, Best Buy in Canada and, according to The Guardian, Tesco in te UK. The only place to get the device online at this point may be eBay.

Google is still accepting orders for the 8GB version however, which costs $199.

The 7-inch, Asus-built tablet, which began shipping earlier this month, is the first to run the latest version of Android, codename Jelly Bean. It has a 1280×800 HD display (216 ppi) and a quad-core processor. It has received widely positive reviews from the press — our own Peter Pachal called it “the Android media tablet the Kindle Fire was supposed to be.” 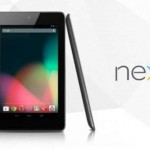