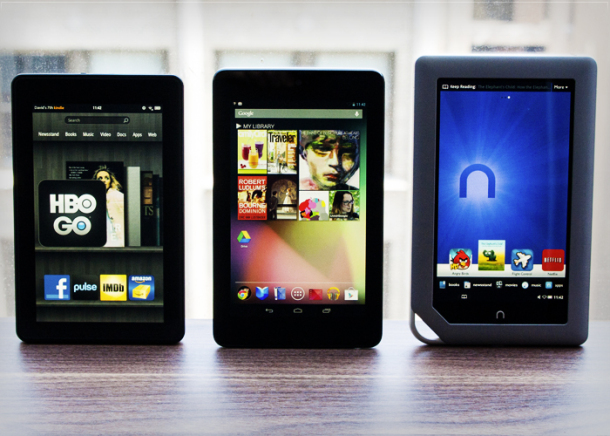 Google last week announced its Nexus 7 tablet for $199, but that isn’t the only tablet available at that price. Amazon, Lenovo, Research In Motion and Barnes & Noble also offer $199 tablets.

Features vary in tablets of that price, including differences in internal storage, cameras, processors and operating systems. The Nexus 7 has the latest ARM processor and Android 4.1 OS, but the tablet may not be attractive to buyers looking for expandable storage or dual-cameras, which are available in similarly priced competitive products.

Here is a comparison of tablets at that price: Google definitely believes a 7-inch tablet will provide unparalleled access to apps and entertainment available at the Google App Store. The price tag is also a major attraction, as is Android 4.1, code-named Jelly Bean.

The Nexus 7 tablet is 10.16 millimeters thick, weighs 317 grams and displays images at a 1280-by-800 pixel resolution. Other features include a front-facing camera and connectivity features like Wi-Fi, Bluetooth and NFC (near-field communication). The device offers nine hours on video playback and 300 hours of standby time on a single battery charge. The tablet is $199 with 8GB of storage and $249 for 16GB. The tablet runs on a dual-core Cortex-A9 processor.

The Nexus 7’s screen size offers a nice way to browse the Internet, check social media, read news and magazines and watch video without feeling cramped on a cellphone screen.

One complaint with the Nexus 7 has been the absence of a rear camera. Other complaints have been with the 16GB storage limit and the lack of a microSD slot to expand the internal storage.

But the tablet does have a leg up over sub-$200 rivals because it comes with Android 4.1, the latest version of the OS. The low price has tempted some buyers, even iPad users, to pick up the tablet to see what the OS is about. With Apple’s stranglehold on the tablet market, analysts surmise that Amazon’s Kindle Fire tablet could bear the brunt if Google’s Nexus 7 becomes popular.

The $199 tablet has an 8-inch screen and is geared toward frequent buyers of books, music and movies from Amazon’s online store. The tablet has limited storage of 8GB and the lack of a camera is a disappointment, but the device has some nifty software features like the Silk browser, which could speed up Web browsing by pre-processing pages in the cloud.

The Kindle Fire has a customized version of Android and the $199 has attracted buyers. The tablet has a dual-core processor, displays images at 1024-by-600 pixel resolution, weighs 413 grams, and provides roughly eight hours or battery life. Lenovo’s IdeaPad A1 has some features like dual-cameras and a micro-SD slot not found on rival $199 hardware, but the device runs on the old Android 2.3 OS, which puts it at a disadvantage.

The tablet also offers optional mobile broadband connectivity, a feature not available on rival $199 tablets. The hardware includes a Cortex-A8 processor and LPDDR2 memory, both of which are found largely on smartphones. The A1 has a 0.3-megapixel front and three-megapixel rear camera. The tablet weighs 400 grams and provides around seven hours of battery life. Research In Motion is selling the BlackBerry PlayBook with 16GB of storage for $199, with a 64GB version available for $299. The tablet has a 7-inch screen, a dual-core processor and the screen displays images at a 1024-by-600 pixel resolution.

The tablet may appeal to BlackBerry device owners, with the ability to sync calendars, contacts and messages. Users can also seamlessly switch applications from a PlayBook tablet screen and BlackBerry smartphone display.

But PlayBook sales have been weak and RIM has delayed the release of its upcoming BlackBerry 10 OS.

With a fast-shrinking market share in tablets and smartphones, RIM faces a tough road ahead as it tries to retool its tablet and smartphone strategies. Barnes & Noble is selling its Nook Tablet for $199 with 8GB of storage. The device has a customized version of Linux and is designed for users to access content from Barnes & Noble’s online bookstore, which has 2.5 million books.

The Nook Tablet has no cameras, but it has a micro-SD slot for extra storage of up to 32GB. The device provides 11 hours of battery life, and B&N has an online store to download tablet apps such as Angry Birds.