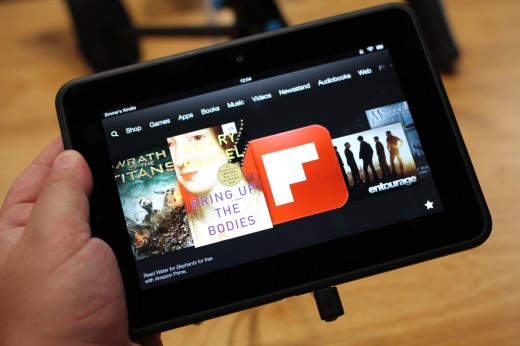 We had a chance at Amazon’s Kindle event to take a look at most of the new models that they’re introducing today. The Kindle paperwhite, which we found to be pretty great. The Kindle Fire HD is the flagship, though and we also got a peek at it. Unfortunately, we were only able to try out the 7? model, as the 8.7? flavor was reserved for Amazon execs only, who were on hand to demo them.

We had Amazon’s head of Kindles Peter Larsen demonstrate it for us, that will come in just a few, but for now we have a look at the Kindle Fire HD hands-on and some shots at medium range of the 8.7? model.

The Kindle Fire HD is a beefy update to Amazon’s original Kindle Fire. It’s been streamlined in almost every way, with a thinner overall package and a lighter, airier feel. It’s definitely bespoke design, unlike the original Fire, which was basically a BlackBerry PlayBook.

The dual-speaker design is clever, but with the speakers tucked away on the sides, they reside right inside your cupped hands. It was difficult to hear in the loud and crowded hangar, but will likely be easier in quieter circumstances. I found that holding it upside down, with the speakers at the top of the device, projected the sound better, to be honest.

It was impossible to judge whether the WiFi was any faster, though Amazon CEO Jeff Bezos spent a decent amount of time talking about the inclusion of MIMO and dual WiFi antennas, as well as finally including the 5GHZ band.

The speed of the interface overall seemed adequate, but not anywhere near mind-blowing. Hopefully there will be some optimization done before they ship, because it’s not class A now. It’s a very good ‘class B’ experience, about on par with the Galaxy Nexus or perhaps a bit slower. Nowhere near as quick as an iPad, for instance, which is a bit disappointing considering the OMAP 4 computing power and memory bandwidth under the hood.

The look and feel of the interface, however, was quite nice. It placed the content in your face well in a less obnoxious way than the Nexus 7?s store widget. The sideways scrolling of content is pleasant, with the carousel only hampered by speed.

The X-Ray for Movies feature was super cool in action, as it detects who is in the scene of the flick and drops down a display of actors and directors and more.

The Kindle Fire HD comes in 3 models, all which are available for pre-order now and ship September 14th:

Note that while the LTE plan was only announced as including 250MB for $49, there are also 3GB and 5GB plans which take on AT&T’s standardized pricing for LTE. More: Engadget, The Verge and Gizmodo