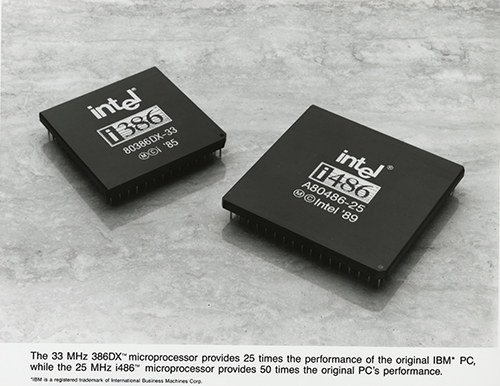 Today, Intel celebrates 44 years of existence. As they celebrate their 44th birthday, lets see how Intel has revolutionized the world in these 44 years.

When did it all start?

Intel was founded in 1968 by two ex-Fairchild Semiconductor employees, Gordon E. Moore and Robert N. Noyce. The company was originally called “N M Electronics.” Legend has it, their preferred name — “Moore Noyce Electronics” — sounded too similar to “more noise,” not a great brand message in that industry. “Integrated Electronics” was considered as a possible name, but was taken, so the first syllables of each word were used instead.

“Intel,” described by Noyce as “sort of sexy,” was eventually agreed upon. The pair then purchased the “Intel” trademark from the Intelco hotel chain for just $15,000.

How did it start?

In 1969, Nippon Calculating Machine Corporation requested that Intel design 12 custom chips for its new Busicom 141-PF printing calculator. Instead of creating a dozen custom chips specifically for the calculator, Intel’s engineers proposed a new design: a family of just four chips, including one that could be programmed for use in a variety of products.

The set of four chips was called the MCS-4. It included a central processing unit (CPU) chip—the 4004, a supporting read-only memory (ROM) chip for the custom applications programs, a random-access memory (RAM) chip for processing data, and a shift-register chip for the input/output (I/O) port. Intel delivered the four chips and Busicom went on to sell some 100,000 calculators.

Intel offered Busicom a lower price for the chips in return for securing the rights to the microprocessor design and the rights to market it for non-calculator applications, allowing the Intel 4004 microprocessor to be advertised in the November 15, 1971 issue of Electronic News. It’s then that the Intel 4004 became the first general-purpose microprocessor on the market—a “building block” that engineers could purchase and then customize with software to perform different functions in a wide variety of electronic devices.

Guess what happened next?

In 1972, Intel moved into the jewelry market with the acquisition of digital watch maker Microma. At the time, digital watches were considered seriously high-tech, selling for hundreds of dollars, so the move was not a surprising one. The anticipated market for such high-tech timepieces was 200 million units. However, when competition saw watch prices drop to the $10 mark, Intel decided to apply its tech expertise to other areas, selling the Microma brand and assets in 1978.

Then came the 8080 Microprocessor

While Intel can claim many firsts, one of the most seminal was 1974’s 8080 microprocessor, the first 8-bit true general purpose microprocessor, which soon became an industry standard.

Yes, you guessed it right. It was indeed Intel that started the cubicle cuture for workspaces. “There are no closed doors at Intel. Shoulder-high cubicles separate employees — even top management — from one another so that communication lines are always open,” is what Intel believed.

Fast Forward to the 90s

During the 1990s, Intel invested heavily in new microprocessor designs fostering the rapid growth of the computer industry. During this period Intel became the dominant supplier of microprocessors for PCs. By launching its Intel Insidemarketing campaign in 1991, Intel was able to associate brand loyalty with consumer selection, so that by the end of the 1990s, its line of Pentium processors had become a household name.

Then started the expansion plan

In 2008, Intel spun off key assets of a solar startup business effort to form an independent company, SpectraWatt Inc. However, as of 2011, SpectraWatt has filed for bankruptcy.

February 2011: Intel will build a new microprocessor factory at Chandler, Arizona, which is expected to be completed in 2013, at a cost of $5 billion. It will accommodate 4,000 employees.

April 2011: Intel began a pilot project with ZTE Corporation to produce smartphones using the Intel Atom processor for China’s domestic market. This project is intended to challenge the domination of ARM processors in mobile phones.

December 2011: Intel announced that it reorganized several of its business units to form a new mobile and communications group. This group will be responsible for the company’s smartphone, tablet and wireless efforts, and will be headed by Hermann Eul. We all know what Intel today is. We are all familiar with the latest processors that Intel brought into the market. All this happened because they envisioned to provide technology in every house and make it affordable. All in all, Intel started, lived through and is still driving technology innovation. Today, it employs more than 100,000 people and has revenues worth more than $50 billion. With Ultrabooks and mobile processors on its radar now, it is clearly evident that they don’t plan to stop any soon.