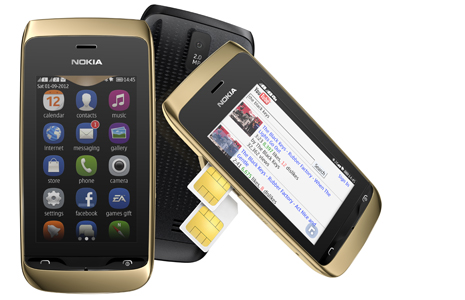 Nokia has announced a pair of new Asha touchscreen phones; Asha 308 and Asha 309 to join the race with the previously released Asha 305, Asha 306 and Asha 311. While all these phones come under the category of ‘feature phones’, the finesse giant’s press releases continues to give them a smartphone stature. The 308 and 309 still use Series 40 as their operating system, except it’s now called ‘Nokia OS’. What has really changed then? Let’s have a better look by comparing the latest Nokia Asha 308 with the old but one of the best sellers of the family; Nokia Asha 305. The Nokia Asha 308 price in India is INR 5,490 while you can buy Nokia Asha 305 for a price of INR 4,295. Asha 305 has a neat curved back made up of glossy cheap plastic, a glossy front with faux metal accents and with the cheap price tag, we can’t expect more with 305 in terms of design. This touch screen phone measures 12.8 mm thin and weighs around 98g and on the other hand, Asha 308 is 13 mm thin and like every other sibling, it is made up of shiny plastic and weighs around 102g. Both of them are not extravagantly attractive but look durable nonetheless. They both are good enough in terms of design and build quality. Asha 308 and Asha 305, both, sport a 3 inch LCD touchscreen. The major difference is the sensitivity as the Asha 305 has an older resistive touchscreen while Asha 308 houses a single-touch capacitive touchscreen. Both the phones have screen with 240 x 400 pixel display. Courtesy to the resistive touch screen, Asha 305 doesn’t impress in the screen department while Asha 308 is pretty advanced in this department when compared to the elder sibling.

Both the phones, Nokia Asha 305 and Nokia Asha 308 try counter their ‘feature phone’ tags with a big surprise in the form of a brand new Series 40 interface inspired by smartphones which is now called as ‘Asha OS’. It is not exactly like a feature phone UI and neither can it be considered as complete smartphone OS but it is very simple and user friendly. It has Symbian like icons and the home screen swipes that add more charm to an impressive user interface. There are three home-screens present in Asha OS and Nokia has stripped off the concept of desktop making the app menu the main home screen. There is also an Android-esque notification window that can be useful for checking messages, missed calls and other notifications. There are plenty of apps and games there, a lot of them free. They are still behind the big players in the app store game, but for a feature phone having an app store at all is a major lift. Another thing worth mentioning is the gift of 40 EA games that come for free when you get this Nokia device. You just need to register on the app catalog to get them and enjoy the basic versions. This phone doesn’t have an in-built GPS receiver but Nokia Maps can use Cellphone triangulation method to get your approximate location. Both the phones are powered by single core 1 GHz processor with 32 MB RAM and 64 MB ROM.

Both the phones feature a not-so-decent 2 MP camera that produces photos. Images turn out to be average in daylight but the phone fares terribly when taking indoor photos. Secondary camera is absent in both of the phones.

Coming to the connectivity part, the Nokia Asha 305 is a dual band GSM device (900 / 1800) and offers GPRS and EDGE class 12 but there is no 3G (HSDPA) or Wi-Fi on board. This is where Asha 308 is better than its predecessor as it has a quad-band radio that supports 2G networks. As for the file transfers and talking, it supports Bluetooth 2.1. For both data connection and charging, both use a micro USB port. And finally, there’s the standard 3.5mm audio jack for listening to music or calling through bundled headphones.

Battery wise Asha 305 fares out to be a better one in the battery department with a talk time 14 hours as compared to Asha 308 with a talk time of 9.50 hours may be because of some software optimizations as both of them have very similar hardware as well as the battery capacity.

To decide which one is better is really a tough task since the major features of both the phones are almost similar. It only comes down to the display which is capacitive in the case of Asha 308 while 305 sports a resistive screen which is not really acceptable in this techno savvy generation. Asha 308 is new, a little more advanced than the previous version and is the clearly the best feature phone in the market.