After the roll out of Xperia S that disparaged many with its outdated software and Xperia P that was reckoned as a mid range mobile phone, Sony introduces Xperia U entailing to people with a tight budget keen on having a high- end phone. While it is the cheapest in comparison to its predecessors, it will lock horns directly with mobiles such as HTC One V. Bearing resemblances to its ancestors with respect to its looks, it sports a 3.5-inch screen with a resolution of 854x480p. However, Sony has once again disappointed with its small screen in a backdrop where tablets have been ruling the roost. The illuminated transparent strip at the bottom that can light up in different colors depending on the theme one chooses makes it a youth centric phone. Boasting
of a reality display intensified by the Mobile Bravia Engine, the phone offers great picture quality with amazing brightness and sharp viewing angles. The best part about this phone is its scratch resistant screen that keeps your worries regarding staining it at bay. The 5MP Autofocus camera with LED Flash will enable you to record 720p videos with 30fps. It also accommodates a front facing camera and speaker grille. Sony has however paved way for ease and comfort to its users with the instilling of UI a top Gingerbread in this phone. Xperia U has also infused a number of pre- installed apps like Timescape, Liveware Manager, Neo Radar, and Office Suite that will keep you hooked to it. It runs on the ST-Ericsson NovaThor U8500 SoC with a 1200 mAh battery that will endow the phone with enough battery juice and keep it going for a day, without charging.

Its slim looks, quick responsiveness, good display and the reasonable price tag help it stand out among its counterparts. If you have been eyeing on a budget phone that pegs on a strong performance, Sony Xperia U must be your choice.

If you have already made up your mind to grab this phone, rush to the nearest Reliance Digital store to avail free accessory kit worth Rs.2000 along with it.

This content is produced and owned by Reliance Digital.

Apple vs. Samsung: The Gory Details 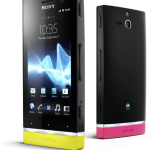