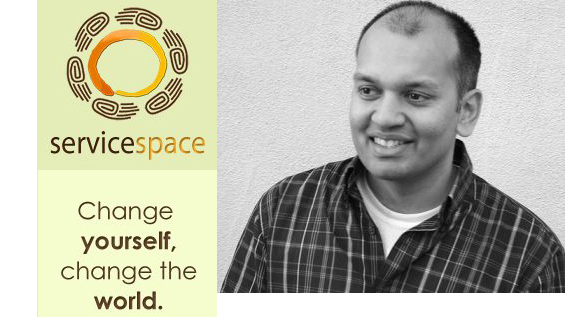 Santa, Are You There?

In the world that’s run by money, let’s hear from a person who transacts in gifts.

When was the last time you gave somebody a gift? Was that somebody a friend or family? Was the occasion a birthday or an anniversary? Or let’s consider the reverse case. When was the last time someone gave you a present? Was that someone your friend or family? And the occasion – was it your birthday, anniversary, or other special days?

By chance, I meet someone who poses precisely the same set of questions at me. My answers are similar to the others seated in the hall. The last time I got presents was on my birthday, from my friends and family. My giving presents to people was a forced exercise, done only so that I could grab a slice of guilt-ridden chocolate cake. This man – tall, fair, and excited – who posed these questions, stands in front of the audience with a knowing smile, visibly happy in this simple room filled with common people. He is eager to tell us a story.

One year ago, in 2012, this low-profile social entrepreneur achieved worldwide acclaim when the graduating batch of the University of Pennsylvania (UPenn) invited him to deliver their graduation speech. His speech ‘Paths Are Made By Walking’, highlighted the lessons learnt during his pilgrimage on-foot across rural India that he undertook along with his wife. Delivered in an unhurried manner much like now, it got him a standing ovation from the newly-minted graduates of the university. All it took was a twenty-minute talk for an unknown name, Nipun Mehta, to become viral phenomenon on the internet. Not too long ago, in 2005, just six months into his marriage and after having fairly established his social venture ServiceSpace, the newly-wed Mehtas decided to let go of everything and take a leap of faith into a world away from materialism. It would have seemed outlandish, but not for the Mehtas, who sold everything they had and flew back to India to begin their ascetic journey. Between the two of them, they budgeted a dollar a day, mostly for incidentals—which meant that they had to depend entirely on the kindness of strangers for their survival. Over the next six months, they ate whatever food was offered to them and slept wherever they were offered space. The experience deeply affected them; the kindness in strangers overwhelming them on various occasions. Mehta recounts, “We walked at the peak of summer, in merciless temperatures hovering above 45 degrees. Sometimes we were hungry, exhausted and even frustrated. Our bodies ached for just that extra drink of water, a few more moments in the shade, or just that little spark of human kindness. Many times we received that extra bit, and our hearts would overflow with gratitude. But sometimes we were abruptly refused, and we had to cultivate the capacity to accept the gifts hidden in even the most challenging of moments.”

There are a little over fifty people in the hall, from all ages and vocations – social workers, entrepreneurs, students, teachers, professionals, all enraptured by the soft benevolence evident in Mehta’s voice. With his white kurta-pyjama, apparent spiritual inclination, and a warm persona, Mehta could easily qualify for the quintessential godman but chooses not to, having no propaganda whatsoever other than fostering goodwill in this world. He retains his identity as that of a social entrepreneur, except for one difference – he doesn’t trade in money, but in kindness. He has never worked for pay in the last ten years. “According to the IRS, I’m definitely poor, but anyone who knows me will tell you that I live like a king,” he chuckles. Mehta, after his journey, returned to the US and resumed ServiceSpace, which now has turned into an incubator for gift-economy projects, with him as its Chief Inspiration Officer. ServiceSpace has pioneered the idea and power of gifting to promote joy and well-being, giving birth to the one-of-a-kind restaurant, Karma Kitchen, in the US and subsequently, inspired the recent Seva Cafés in India. Imagine going to a restaurant where, after you eat your fill and ask for the bill, you receive a check for zero rupees. Along with it comes a Smile Card that says you have been tagged by someone who has already paid for your meal! You are overwhelmed after knowing how a random act of kindness actually feels. The Smile Card gives you a chance to carry this anonymous act of kindness forward. You sponsor the next person who comes in to eat and pass on the same Smile Card allowing this chain of kindness to grow. Congratulations! You have unknowingly made the gift-economy function. Mehta says, ‘During our pilgrimage, extremely poor villagers, who couldn’t even afford their own meals, would often borrow food from their neighbors to feed us.  These people knew how to give, not because they had a lot, but because they knew how to love life. They didn’t need any credit or assurance that you would ever return to pay them back. Rather, they just trusted in the pay-it-forward circle of giving. This trust is what sustains this generosity.’ Gift economy works on this trust. If people today decide not to be kind enough to give, the system would crumble within a matter of minutes.

A computer science and philosophy major from Berkley, he worked for a year with Sun Microsystems before getting disenchanted with the greed that spawned with the dot-com boom of the 90s. It was this lust for money in the industry that repelled him from computer science and brought him closer to his other major, philosophy. It reawakened his suppressed desire to give, a cultural value he tells that he has imbibed from his early childhood. His family thought he was crazy when he left his job to for an uncertain path to become ‘a better person’. He says, “I reached a sort of a compromise with my parents. They wanted me to be able to sustain myself in whatever. I agreed to their demands. But since they didn’t elaborate on the word sustain, I changed my way of living in such a way that I wouldn’t need anything more than the very basic amenities.” The parents in the audience laugh along with him.

Mehta is in India for three months, until February, and it is during his three-day stay in New Delhi that I attend this talk on ‘giftivism’ – the practice of radically generous acts that change the world. Through stories ranging from his personal life to that of Malala, he elucidates how giftivism can instigate shifts from consumption to contribution, transaction to trust, isolation to community, and scarcity to abundance. He recalls, ‘I met a lady in Bengaluru who after reading my UPenn lecture, decided to serve tea to morning walkers in a nearby park. Initially, people seemed skeptical and didn’t take her tea, but she won them over with her warmth and love. The next week, a few other walkers joined in and started serving water and biscuits as well, covering a wider audience.’ Employing the subtle technique of show-not-tell, he makes the audience see for themselves how the aforementioned shifts played out, transcending paradigms. For a country where most such ‘awakened’ individuals turn into self-proclaimed gurus and begin monetizing their knowledge, it’s a welcome change to see Mehta handling his ideas with a difference, by sharing them generously. When the talk ends, the crowd not only stands up, but also jumps up to hug Mehta, as if they have been devoid of such genuine and heartfelt huggers here in Delhi. Mehta embraces each one of us like he had been missing us for so long. Meanwhile, thousands of Smile Cards are distributed amongst the enticed audience, which they pocket as soon as they can grab them. These little cards of kindness are soon going to make rounds of the capital.

Keep your eyes open, for one of these days, you might just receive a surprise tagged with a Smile Card. After all, it’s Christmas time. It’s the time for getting presents, but more importantly, giving them too. How about paying for the next coffee at a café? Or gifting an anonymous pack of chocolates to your next door neighbour? Or cooking for your maid for a day? Or just a hug and a heartfelt thank you to the person you encounter every day – maybe, the night watchman who bears the biting cold just to assure your safety? Tell me, whose Santa are you planning to become today – and the next day, and the days beyond? Santa, are you there?

Harsh Snehanshu is an author, most recently of Because Shit Happened – What NOT to do in a start-up!, a freelance journalist, and a Young India Fellow.