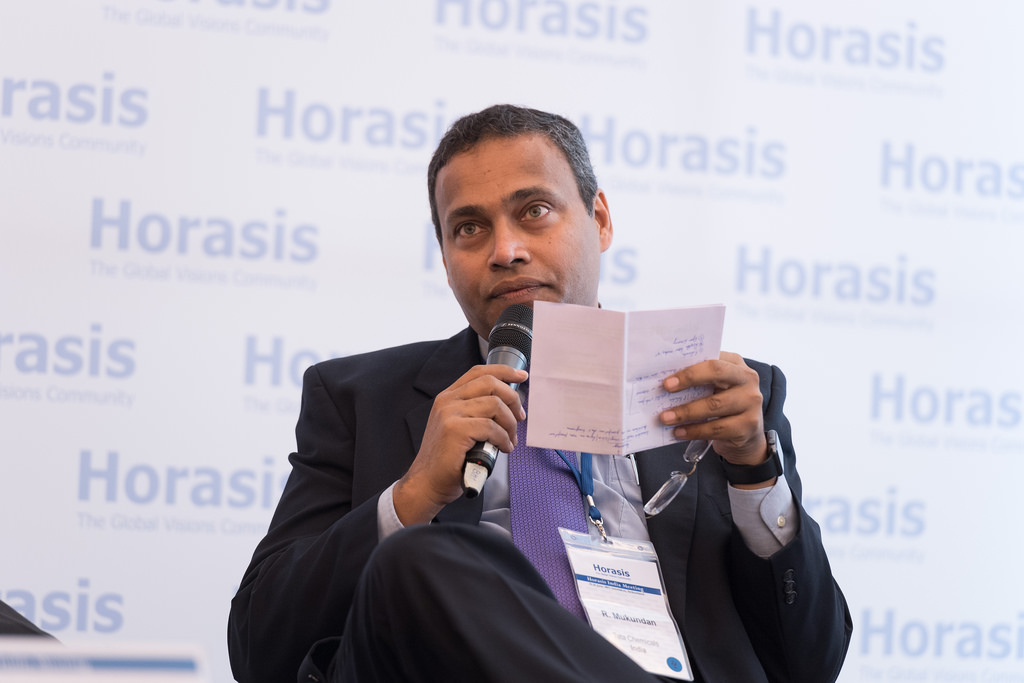 ‘Technology and Globalization is on Tata Chemicals’ Radar’: R. Mukundan on Indian Agro-Tech

Of the $100 billion Tata Group’s many successes, Tata Chemicals Limited may not be known to many people. But as a company that began in Mithapur, Gujarat, in 1939 with a small plant, it has now taken giant strides in the agricultural sector. With a market-leading international business, the company has operations across four continents. In addition, their Innovation Centre is home to world-class research and development capabilities in nanotechnology and biotechnology.

Tata Chemicals MD R. Mukundan, who is one of the several hundred delegates invited to the ongoing Horasis India meeting in Malaga, Spain, spoke to The Tech Panda about Indian agro-tech in the global market.

Mukundan thinks the Indian economy is certainly integrating in with the global economy in many ways ever since developments took off in the 90s. He reiterates how India is effectively linking itself to the startup hubs around the world. He praises the way the Silicon Valley, Bengaluru, the hub around Mumbai, and several such startup hubs are linking with other startup hubs in Europe, Asia, and Israel.

“There is a combination of both traditional investment and trade, and in addition to that, the new digital wave, which is transforming the entire landscape of companies,” he says.

So is India’s agro-tech on par with the global scale? Mukundan thinks India is making progress, but we need to do more.

Another element in Agrotech, which Mukundan believes to be critical, is that efforts should not be limited to just digitally connecting farmers for acquiring better data on soil and seeds. He thinks progress is required in infrastructure in terms of storage, logistics, and transportation.

“Things are improving, but I think a lot more can be done there, and I think agro-tech companies are doing terrific work,” he says.

According to Mukundan, the drivers that are pushing Indian agriculture to globalization are increasing consumption and the shift in said consumption. As to how long it might take India to get there, Mukundan says, “In my view, it’s a journey, and while there are places where this productivity is already at par with the international level, it has to spread more.”

Mukundan says India’s growing population will obviously result in a greater need, and the shift in consumption is going to be more towards fruits and vegetables to higher proteins, and this will drive data productivity. Consequently, these sectors will see more investment.

“Effectively, my view is, India will consistently strive to feed itself, and that itself will keep pushing productivity,” he says.

TATA chemicals has made a lot of progress in agriculture tech to help the Indian farmer. The company has setup three research and development labs, two of which are in Bengaluru and one in Pune. While the Pune lab concentrates more on biotechnology and nanotechnology, the lab in Bengaluru focuses on the agro-tech and plant-breeding techniques. “Our efforts are to use technology to improve the productivity and capacity of farmers, so that they earn more money,” Mukundan adds.

The Tata Group is also running an innovation tech program on the use of drones for monitoring and improving agro productivity. This can help especially since farmlands and farmers are scattered and remote. This could bring in a new wave of connectivity that will enable farmers gain more.

On the industrial chemical side, Tata chemicals is poised well in the international market. With their largest operation in Wyoming, US, the company has a 24% market share in the US market. Their presence in Europe is large as well, especially in the UK, where they enjoy a 50% market share on some of the products they make. Their position in Kenya, Africa, also helps establish the fact that their basic chemical sector is fairly global.

Since tropical and subtropical crops require the kind of solutions that the Indian Tata Chemicals is more familiar with, their operations are spread across regions such as India, South East Asia, Latin America, and parts of Africa.

“As far as the agro-tech area is concerned, we are focused mainly on India. Though we also have some amount of exports into South-East Asia and Latin America, it is more focused on tropical and subtropical crops,” Mukundan explains.

Technology and globalization are on Tata Chemicals’ radar when it comes to planning for the future.

“In terms of moving forward, our approach is not just to deepen our presence in India on the technology side, but also look at opportunities in this space in terms of how can we grow our presence, especially in the overseas markets,” Mukundan says.

This article was co-authored by Tim Hinchliffe.