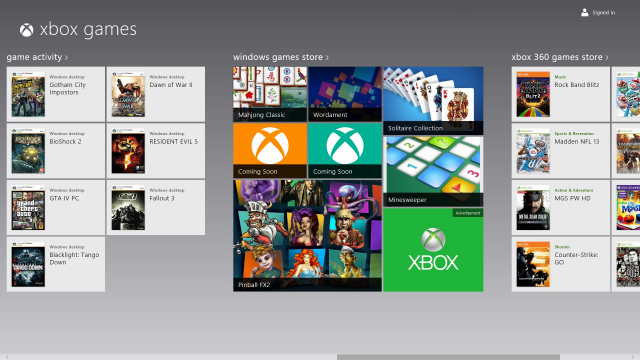 As a branding exercise, the recently unveiled “Xbox Games on Windows” is more than a little confusing. The “Xbox” name has previously been exclusively reserved for Microsoft’s console gaming efforts (update: and recently on Windows Phone systems, as some commenters have pointed out). With the launch of Windows 8 next month, that name will also be associated with a related, but totally separate product on the PC.

The best way to think of the Xbox Games on Windows is as a PC-based version of Xbox Live Arcade. Like the console-based game download service, Microsoft will directly control game approval and release scheduling on Xbox Games on Windows. Developers will still be able to submit normal downloadable games for sale through the regular Windows 8 Store, of course, or just release PC games on their own. But those titles won’t be launchable through the preinstalled Metro-style (sorry— Window 8-style UI) Xbox on Windows app. Nor will they be integrated with existing Xbox Live features like Achievements, friends lists, Avatars, leaderboards and in-game rewards. A representative told me that Microsoft hopes to roll out games regularly every week, just like it does on Xbox Live Arcade, but that the company hopes to speed up the release process down the line.

While some of the Xbox on Windows titles announced last week are already available on Xbox Live Arcade, console players won’t just be able to re-download their existing purchases on their Windows 8 PCs and tablets. That sort of PlayStation-style “Cross Buying,” as well as the ability to play, pause, and resume cross-platform releases across all your Windows and Xbox devices, is “part of the eventual plan” a spokesperson told me, but these features won’t be available when Xbox on Windows launches.

Still, there will be some level of cross-platform integration built in to the initial lineup. Pinball FXdeveloper Zen Studios is working to allow purchased tables to be downloadable across the Windows and Xbox 360 versions of the game, for instance, and Skulls of the Shogun will allow for asynchronous multiplayer between players on the two platforms. Some games will also be optimized for both mouse and keyboard controls on a desktop or laptop, as well as touchscreen and gyroscope controls for play on Windows 8 tablets, obviating the need to buy a new version for a new interface.

Many Xbox on Windows games will also be experimenting with some nontraditional revenue models; almost half of the service’s launch titles will be free-to-play games that make money through ads or add-ons. Microsoft Solitaire Collection, for instance, will include puzzle-like daily challenges that are playable only after viewing a video ad. Myst-style exploration game Adera, on the other hand, will see its free first episode preinstalled on many Windows 8 machines, but players will be charged to download further episodes.

On the whole, the “Xbox Games on Windows” service seems a lot less ambitious than Games for Windows Live, Microsoft’s much–maligned and recently ditched effort to unify the Windows gaming ecosystem into a more coherent whole. Instead, this seems like a much more direct effort to let certain developers work with Microsoft to easily and cleanly integrate popular Xbox Live features into their PC games. But the confusing branding and limited, slow-drip selection of games seem unlikely to transform a Windows 8 gaming environment that Valve’s Gabe Newell recently called a catastrophe.

More: The Next Web