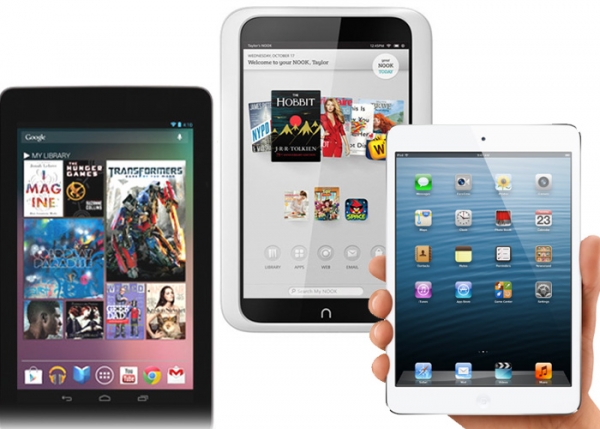 The approach of Black Friday, Cyber Monday, and the Christmas shopping season has sent the battle for the 7-inch tablet into fever pitch.

Apple, Amazon, and Google have all released 7-inch devices which have brought the prices of tablets down far enough to reach a greater number of consumers.

Thomson Reuters is already reporting that these smaller tablet devices are ready to surpass the sale of PC’s for the first time in North America, with one-third of US consumers thinking about buying one.

However, Apple seems to be struggling amid the competition, says Reuters, with customers already preferring Amazon’s Kindle Fire HD.

“There has been a lot of controversy about the fact that the iPad mini is $329, that the price might not be right,” said Jharonne Martis, director of consumer research for Thomson Reuters.

That view is corroborated by the e-commerce site CouponCodes4U.com, which said in a press release that Kindle sales will outstrip the iPad Mini by three-to-one.

CouponCodes4U  based its finding on the number of searches for each device on its Web site, which shows that there is more interest in the Amazon tablet than the iPad Mini.

“It is no surprise that although some families would probably love to purchase an iPad Mini device for every member of their family, they simply cannot afford the higher costs and would rather purchase a Kindle device instead,” said Mark Pearson, Chairman of CouponCodes4u.com. “This may be one of the reasons behind the lacklustre reception that the latest Apple device has received.”

The Kindle Fire HD is priced at only $199, compared to the Google Nexus 7 which also starts at $199.

Apple’s device comes with a 1024×768 pixels resolution on a 7.9-inch display – far below the 2048 x1536 users get on an iPad 4’s Retina display, but equivalent to the iPad 2. It also comes with the iPad 2’s dual-core Apple A5 processor, so in many ways is a stripped down version of the second-generation iPad.

The Nexus 7 also runs a new version of Android called Android 4.2, which brings goodies like Gesture Typing – a form of typing which lets you glide your finger over the letters to form the words. You can also wirelessly stream content from the tablet to your TV.

With a 1.2GHz dual-core ARM processor it’s not as powerful as the Nexus and runs its own modified version of Android 4.0. That means it locks you into using Amazon Prime, Amazon Cloud Storage, Amazon Cloud Player, Amazon Instant video, Amazon Silk, Amazon App Store, and Amazon Kindle Store, for all your online streaming and content needs.