Intel India have trained 9,500 workers in AI over the last six months, and plan to add at least another 5,000 more, to bolster home-grown innovation potential, amid economic and tech sector downturns.

The announcement follows up on the commitment they made at the ‘India AI Day’ event to work with government and academia to train developers, professors, and researchers through events like ‘Code Modernisation’ workshops to stimulate innovation and advancements in the emerging fields of AI technology.

India’s tech sector is generally seen to be in need of homegrown talent and ideas. The Modi government has become embattled on the topic of skills and economic growth, having failed to get its flagship skills program functioning on budget and on target.

Outsourcing has been a pertinent topic of late, as forecasts for both the Indian economy and tech sector have been downgraded, as previously reported on Tech Panda. Though offshore teams and service centres have been crucial steps in India’s tech sector development, they are not host to the innovation and intellectual property of the host company, nor are they the destination of revenue generated.

And even so, outsourcing has been on the decline recently, with many of the big international tech employers in Bangalore laying off large numbers of workers, putting a dent in tech sector growth in the region, now expected to rise just 5.3% in 2017 compared to the previous 8-10% estimates for the 2016-17 financial year. Sustainable tech sector growth will require innovative companies to emerge from India’s own talent pools.

As much was echoed by Ratan Tata recently at a VC event, “I don’t think we have as many really disruptive startups in India as we do overseas,” the business mogul opined, “We must create an environment where [an individual] can be motivated here [in India] and that requires a community of investors, capitalists who take risks.”

Both the IMF and the World Bank have cited Brexit-driven uncertainty and Trump protectionism as contributing factors to the economic downturn, the UK and the US being the only two countries with a higher tech sector company-count than India.

On the broader economy, the Prime Minister has had to step into the debate in an attempt to quell concerns. The removal of high-value bank notes and introduction of the Goods and Services Tax are both seen as additional potential causes for the reduction in growth, which the government accepts, but has justified as foundational changes to the economy which will produce strength in the coming months and years.

“Achhe din aane wale hain,” Modi promised during his campaign. The Hindi sentence translates as: “The good days are on their way.”

As reported in The Sociable, if developing nations fail to gain ground in innovation GDP inequality could begin to grow again halting the progress experienced since the 90s. 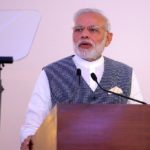