Windows 7 has finally overtaken Windows XP altogether, according to the latest market share data from Net Applications. August 2012 also happens to be the first month that Apple’s total Mac OS market share is above that of Windows Vista’s. Another year or two, and Mac OS will likely surpass Windows XP too.

At the end of April 2011, Windows 7 passed the 25 percent mark. Now it’s on its way to passing the 50 percent mark, although by then Windows 8 will already be available (it ships October 26).

Microsoft is also doing everything it can to get its users off Windows XP. On April 14, 2009, Microsoft retired Mainstream Support for XP, and with it, support for IE6. The company is not planning to retire Extended Support for the operating system until April 8, 2014.

By then, Windows XP will still be likely on at least one in every five computers, unless Microsoft can convince everyone that Windows 8 is the future. From both a business and security, this will be a key to the software giant’s strategy going forward. 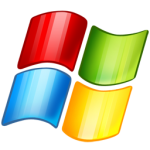