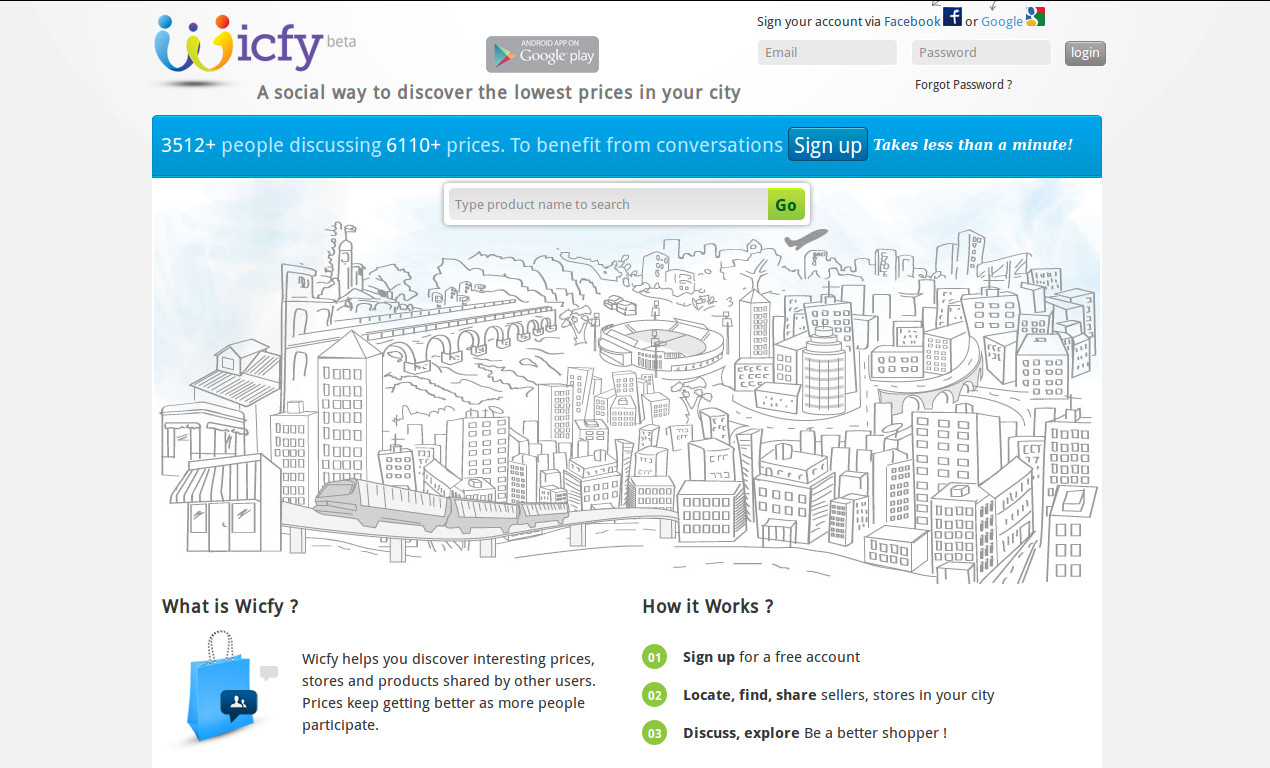 Wicfy, the social discovery platform that enables users to find the lowest prices of products in their cities has raised an undisclosed amount in a follow-on round of funding from Ecosystem Ventures LLC, a Silicon Valley-based seed stage investment firm that had also invested in Facebook & Twitter, and Adrian Morger, founding partner at Everest Wealth Management AG, an investment advisory firm, along with a couple of unnamed investors. Morger invested in his personal capacity.

As part of the investment, Alexander Fries, president, Ecosystem Ventures, will join the board of the company.

The company had raised Rs 1.2 crores ($203,112) from the same investors in Jan this year, although at the time, there was no information available on the deal size or the investors. The funds are being invested in enhancing the platform, product development, patent procedures in the US, and for launching app on multiple platforms. The company had launched its Android app in Feb this year, and is now planning to launch an iOS app by October 2013.

“We will invest the funds on user acquisition, expanding the team, and replicating our model in multiple cities in the country. Since the platform is based on user-generated content, we will to focus on user engagement, gamification and discoverability of the platform. Marketing will be a key focus area for us and we will do online marketing, as well as release informative product videos (about the platform) on video hosting sites like YouTube, Vimeo, etc.” said Arun Purohit, CEO.

The company’s platform allows users to discover prices (for branded products), stores and products shared by other users. All the content on the platform is user-generated and hence prices keep getting better as more people participate. While new content can only be uploaded by registered users, it can be consumed by anyone. Once signed up, users can participate (and win) in price suggestion contests, get to know what their friends and network are buying and at what price, maintain a personal ‘iWant’ list- for products they want to purchase. Users are provided credits for winning contests or uploading content, which can be redeemed later.

After selecting their location, when a user searches for a particular product, they are shown a list of prices for that product (cheapest to costliest) from both online as well as physical stores. They are also shown a list of markets where the user can get a deal on the product (in the form of sales) is being offered on the same. The results can be filtered according to distance, price, as well as rank (the company rates stores according to users feedback on them) of the store / market. They are also shown the location of the offline stores / markets on a Google map.

According to Purohit, the site has 3,500+ registered users as of now and has had over 60,000 unique users till date, mostly coming from cities like Bangalore, Bombay, Kolkata, and Delhi. The company will start monetizing the platform once it hits the 10,000 monthly active users mark (MAUs). The revenues could from conventional mode of sponsored listings as well as advertisements. Although considering all of the content is user-generated, the company will have to scale up much faster to increase these numbers.

The company will launch its iOS app by October this year. It is also doing a pilot with Shoppingwish.in, a price-comparison site, to also offer price comparison between e-commerce sites. Post that, Wicfy will offer pricing data from both online and offline stores on its platform. The integration should be completed by the end of next month.

“The idea is to provide users with all the information they require to get the best prices on the products (they are looking to buy) in one place. A mix of user-generated content and pricing data from price-comparison sites will work best in that regard. Wicfy will provide a more comprehensive price comparison than other players since it can cover both online as well as offline stores,” said Arun.